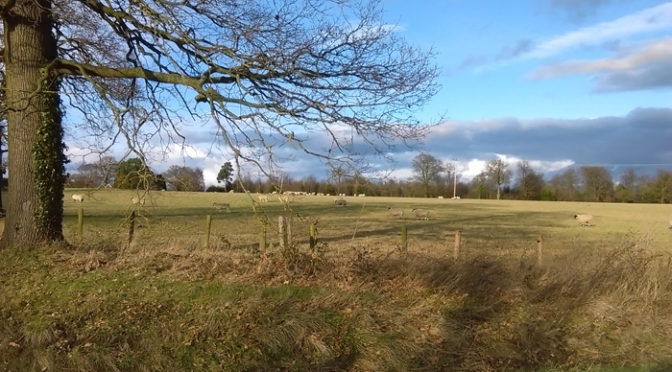 I hurried to the station and was met by 7 Polyramblers  under a small shelter there. I was presented with a long parcel of cake and other unexpected goodies for tea time. Instead of leaving the station by the opening on the footbridge, we all proceeded throught the booking hall which was just as well as 2 extra polyramblers appeared on the other side. I thus rang through to the Green Man to confirm our numbers for lunch.  We headed off past Tescos and via a mini-diversion into my house to unload the goodies etc. The ramble took us westward over a rickety stile before Warren Farm that we then passed and another field and though Flitwick Plantation and across another bit of lane to a track taking us over the Motorway, then though some deciduous woodland. Thence through more lanes until we reached The Green Man pub at Eversholt Church End, and to our reserved table. There are some very old cottages in Eversholt, several with timber beams, and a late Georgian style mansion, called Linden House, whose gatepost plaque quotes “on this site Sept. 5, 1782 nothing happened”. Setting off after lunch we walked eastward past Mill Farm with a pack of assorted barking dogs jumping up at the gates. Then past Castle farm and into Tingrith, a village with architecture in keeping with the Duke of Bedford’s estate. After another mile the path took us to Priestley Farm Shop and some us us purchased the produce within. We were greeted by a large black labrador who followed us outside. After this it was a muddy/puddly track back onto the lane into Flitwick. Some raindrops fell but not much. As we approached the house we were greeted by a huge double rainbow across the sky. The sun was back out. We said goodbye to Dominique and the rest of us went indoors and I put on 3 kettles for tea (choice of Yorkshire or Cornish). I appointed cake cutting monitors. Harriet’s fruit cake she made and brought was extra yummy and we all enjoyed the refreshment with a slideshow of Oberammagau and Skipton trips. I then walked the party back to the station for the 17.50 train.