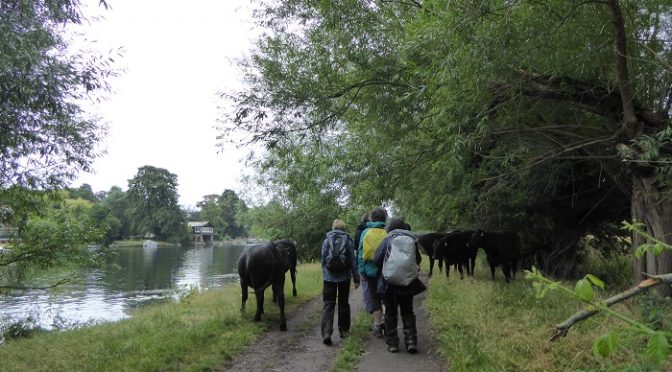 On a rather dull and drizzly morning I turned up at Paddington station and found no Polys waiting for me. As I was making my way to the platform, one turned up and another found us on the train. By the next stop our select group had become four and was joined by five who were already in Cookham. We set off, passing the house where the painter Stanley Spencer lived and worked for 15 years until his death in 1959, through Cookham Dene. We passed a large free-range turkey farm, but still being some time to Christmas, or maybe because of the weather, we saw no turkeys roaming around. We continued into the pretty Bisham Woods and walked along an escarpment with fine views over the Thames arriving at Winter Hill. Kenneth Grahame lived nearby and is said to have taken inspiration for the habitat of Mole, Ratty and company in ‘The Wind in the Willows’ from the river banks and wild woods around there. We descended to the Thames and had our picnic on the riverside before paying a visit to the Bounty Inn a little further along where a beer and jazz festival was being held. Once refreshed we continued along the Thames path and through Cockmarsh Meadow into Holy Trinity churchyard at Cookham. Here there is a memorial stone to Spencer, his ashes having been dispersed elsewhere. Skirting the village the walk took us back down through woods to the Thames. We passed various beautiful large houses and could admire the hanging beech woods of the Cliveden Estate on the other side of the river. Passing the house where Richard Dimbleby lived on Boulter’s Island, we arrived at Boulter’s Lock on the outskirts of Maidenhead. At this point four ramblers peeled off to make their way back to Cookham while the others just made it in time to Jenner’s Cafe before it closed. After the tea break we walked through the town to take the train back to London. It had been a pleasant, mostly dry day, and we were quite happy to have not been required to walk in the boiling temperatures of the previous week.

See you in Lancaster.