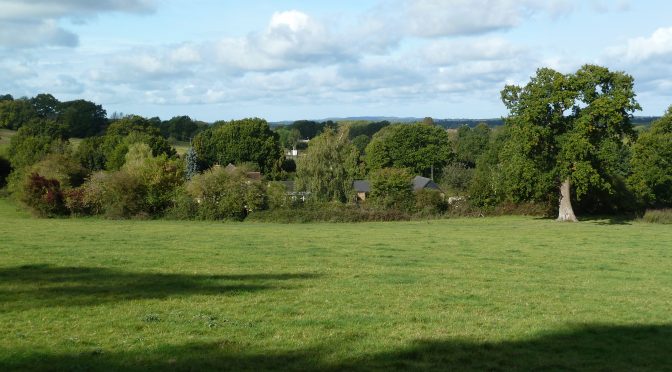 Despite the poor weather forecast and the rival claim of England v New Zealand in the comfort of one’s home,  a very  respectable 13 of us assembled at Horsham station. We walked though Horsham’s large public park and then the town centre, arriving at the attractive St Mary’s parish church. Outside was a volunteer cleaning lady, listing to the rugger on her mobile phone. We were fortunate to hear the final whistle and England’s historic victory. Buoyed up by this, we headed south, through grazing and woodland to Deene Park. This was formerly a medieval deer park, with an imposing house dating from the 17th century, now divided into apartments. Although the weather was mild, the forecast  rain got ever nearer and we had the first drops as we reached our lunch stop. This was at Nuthurst, in the excellent Black Lion, a traditional English pub if ever there was one. It was with some reluctance that we donned our Goretex and headed out into steady rain.  A 15 minute ascent took us up to the impressive Sedgwick Park House, dating from the late 19th century using stone from an earlier castle. A commendable early example of recycling. Nearby there is a plaque describing that Alice Liddle, the inspiration for Alice in Wonderland, spent her honeymoon here. Passing through further undulating farmland we were soon on the outskirts of Horsham where, somewhat soggy but in good spirits,  we boarded a nice warm train.

Thanks to those of you who came out and endured the less than ideal weather. Thanks to Ida for the photos below