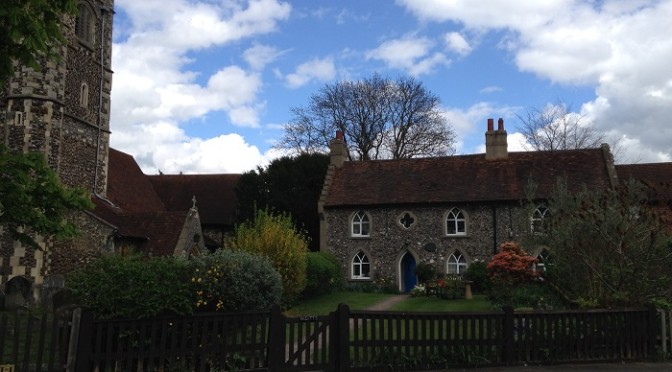 Saturday 25 April: Loop Stage 11 – Elstree to Cockfosters
Seventeen Polyramblers were out on this very pleasant sunny day to walk another section of the loop (there were 15 to start with and we gained 2 at lunchtime and then lost 4 after lunch). Martin handed out chocolate bars on the train to bribe us because the walk before lunch was 7 mile long. There were a few hills in the morning and a lengthy walk up and down the A1 to cross it via an underpass. We stopped to eat our chocolate after this ordeal at Moat Mount OpenSpace. We followed the Dollis Brook for a while until we arrived in High Barnet where we had lunch in the Queen’s Head pub. We had a pleasant surprise when Rosemary walked into the pub garden to have lunch with us. Afterwards, there was a longish climb up King George’s Fields (site of the 1471 Battle of Barnet during the Wars of the Roses) where we had good views of London. We arrived at Hadley Green and Livingstone Cottage, where the famous explorer of that name lived in the 1850s. On the corner are Sir Roger Wilbraham’s pretty Almshouses founded in 1612 and the Church of St. Mary the Virgin, which dates back to the 12th century. We ended the day by walking through Chase Country and Monken Hadley Common before arriving at Cockfosters tube station. 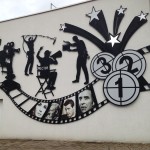 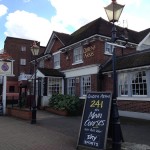 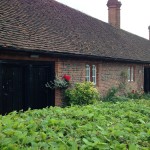