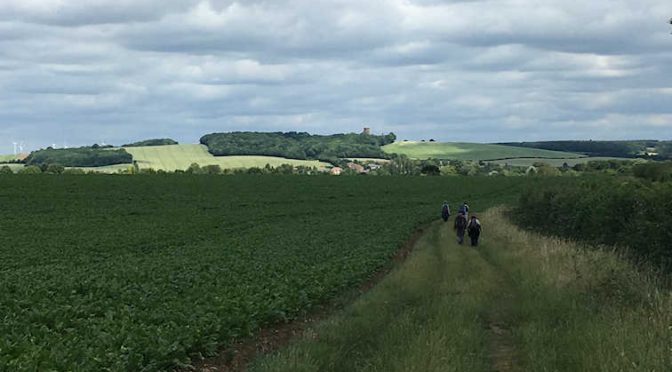 Thirteen stalwarts continued our walk along the Icknield Way long distance path at the weekend, carrying our overnight essentials on our backs.  Luckily the weather forecast was clement so we took the risk of dispensing with serious waterproofs and fleeces and travelled light (well, some of us travelled lighter than others). Things were going smoothly when the train pulled in at Great Chesterford and we all piled out, only for Stuart to discover that his wallet was still on the train. After a few phone calls he headed off to Cambridge to retrieve it (thanks go to David – the passenger who kindly handed it in and the lady from the Greater Anglia contact centre who helped to reunite him with it). Meanwhile we were joined by Mike and Heather from Cambridge for the morning and Mike helped to lead the morning walk. Much of this part of the Icknield Way is long stretches of field paths and green lanes so navigation is fairly easy. After a couple of hours we arrived at the attractive Cambridgeshire village of Linton. It has two pubs and between us we managed to sample them both. It also boasts a Clapper Stile, one of only seven left in the UK. Unfortunately, in spite of instructions in my guide book, we were unable to locate it.   We left Linton, and Mike and Heather, and headed up a modest hill to a water tower and from there across fields to meet an old Roman Road, the Via Devana, which ran from Colchester to Cambridge. Before long we were on the outskirts of Balsham and Stuart appeared from another path, wallet intact.

He must have done quite a pace to catch us up. We finished at the Black Bull with time for a drink before our minibus arrived to take us the 20 minute journey to the Suffolk town of Haverhill where we were staying in two adjacent B&Bs. We received a friendly welcome from our hosts and after tea, biscuits and showers it was time to head into town for our pre-ordered meal at the Nine Jars Bistro. Everyone seemed happy with their food and the service was friendly and efficient.

Next morning we had time for a leisurely breakfast (including duck eggs for some) before our minibus arrived to take us back to Balsham and another 10 mile stretch. There is an Icknield Way milestone on the village green and we were gratified to see that we had completed 68 miles of the 110 mile walk. Just 46 miles to go to Thetford and the start of the Peddars Way to take us to the Norfolk coast. We carried on walking north east along a three mile long green lane with gravel underfoot. A slight glitch later when Stuart decided to follow his map rather than the walk instructions and we headed down a road in the wrong direction. Luckily Geoffrey was on hand to correct us. Back on track, we had a choice of pubs in adjacent villages for a lunchtime drink. We made the mistake of choosing the second one only to find a note on the door to say it didn’t open until 2pm.   We availed ourselves of their outside seating to eat our picnics before continuing for the final three miles or so to the village of Dullingham which promised two pubs and a train station (though only a 2-hourly rail replacement bus service on this particular Sunday).   We encountered a longish section of seriously overgrown path on this stretch which proved a challenge, especially for those of short stature. Half the group were so keen to catch the earlier bus they ploughed on ahead of the leader and missed the turn off point for Dullingham and the station. Tempted as I was to let them go on, I managed to yell loudly enough to call them back. In the event most of the group made the earlier bus but a few of us decided a leisurely drink was the best way to end the day and we enjoyed a pleasant stroll to the station admiring the impressive properties on the way including one with a newly thatched roof.   Thanks to all who took part. Looking forward to organising stages 7 and 8 next year.