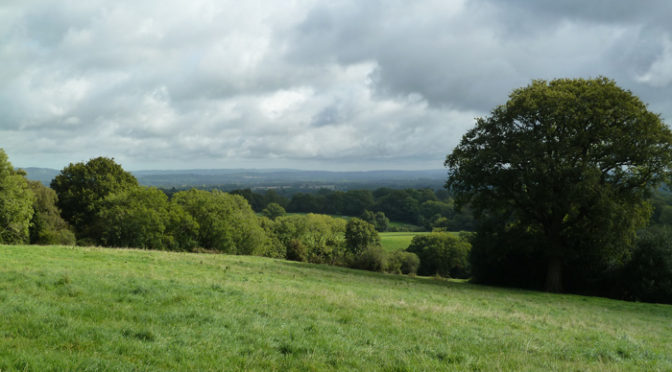 Five polyramblers met up at Victoria for the 9.31 train which left on time.  An hour later we all alignted at Holmwood station, an unstaffed halt, situated in the village of Beare Green. I had to warn the party that the last train back to Victoria was 18.19, however with the walk being down as less than 7 miles, it should be OK without resorting to contingency. There are no main roads on this walk which makes it good for dogs. We proceeded along quiet tracks, lanes and fields via Capel Leyse and Kitlands. We then reached Christ Church on the edge of Coldharbour village and explored inside. On leaving the church I was feeling quite thirsty as the walk so far was on a constant climb. So I asked the party if we should make a 1 km spur extension to the George pub in the village and they all agreed. When we got to the pub it was before noon and not yet open, but there was a shop in a side building separated by a courtyard alley, and we could buy refreshments there and use the loos!

Retracing our steps back to the church, we followed the National Trust signs to Leith Hill Tower and continued to climb up a track through redwood trees reaching the summit and Tower, where there were some open spaces with benches to sit on and admire the wonderful views of the Sussex weald and South Downs to the south, with the North Downs and London – including the distinct Shard pinnacle to the north. Here we sat eating our lunch. Four of us then climbed the Tower.

The Tower was built in 1766 to raise the height of the hill to 1000 ft. Restored by the National Trust in 1984 it now has a servery for refreshments open till 5pm at weekends. At the top is an open viewing area with two free telescopes. From the top I could pick up a view of a gap in the South Downs ridge at Shoreham by Sea and through the telescope I could see wind turbines in the gap as they could be situated in the English Channel.

Back on the ground, we left the hill summit, by a steeply descending SEwards woodland path to a lane, via Cockshot Woods. We then continued through cleared forestry area and beside a field of high corn-on-the-cobs.  Thence through  fields of horses, then cattle, where  we crossed the railway on a high stepped embankment.

We were soon back at Beare Green but had nearly 45 mins before the next train home. We enquired to a local of the nearest hostelry and was told it would be a 7.5 min walk. It transpired to be over half a mile from the station and so only two of the party went to investigate and eventually met us on the station platform where we all boarded the 16.19 back to Victoria.