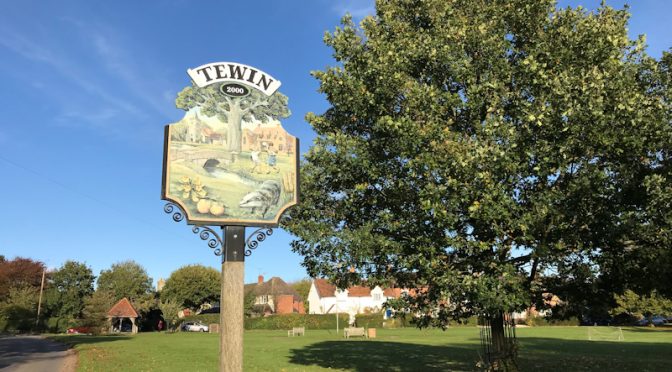 A grey day with some drizzle for this walk in the Hertfordshire countryside and woodland.  At one point, there were 20 walkers on this ramble but numbers varied during the day.  As I was walking to Cuffley station, I saw Martin outside Costa.  I went to buy my ticket and expected Martin to turn up but he did not board the train.  Therefore I was a bit puzzled when I jointed 13 Polyramblers on the train.  With three more waiting at Hertford North Station, we walked up to Thieves Lane and entered Panshanger Park which, in that area, consists of fields and woods.  We crossed the B1000, leaving the Park and continued through farmland and woodland with nice autumn colours.  We passed Bacon’s Farm and soon arrived in Tewin where we had lunch and a warm welcome at the Rose and Crown pub.  We were joined by Martin and Sunita who had been drinking coffee in Costa and had missed the train but managed to make their way to Tewin.  Mystery solved.  And thank you Google map.

Because of my plantar fasciitis, I could only do half the walk so drove away with four walkers, leaving the rest of the group in the capable hands of Tony.  They followed the valley of the river Mimram, a chalk stream (one of only 220 in the world).  After crossing the river, they entered Panshanger Park once again, this time walking along newly opened paths.  Much of the parkland was created by Humphry Repton in the late 18th century, with other parts previously landscaped by Lancelot ‘Capability’ Brown.  It is a historic park and garden registered Grade II by English Heritage.  Tarmac have owned Panshanger Park since the 1980s and have, since the 1990s, carried out phased mineral extraction.  Now that it is nearing its end, they have been restoring the site to return it to agriculture and as a country park and nature reserve.

The Polyramblers followed the Mimram and, just before Kings Lake turned left to climb the hill towards the Great Oak which is the largest maiden (not pollarded) oak in the country with a circumference of 7.6 metres.  It is believed to have been planted by Queen Elizabeth I.  The walk continued along the orangery which was part of Panshanger House, built early in the 19th century from 1806 by the 5th Earl Cowper and demolished in 1952.   Then it was down the valley again where the longhorn cattle were grazing before exiting the park in Hertingfordbury.  Then it was back to Hertford North station after this 10.6 mile walk (advertised as 8.3 miles – apologies and well done).