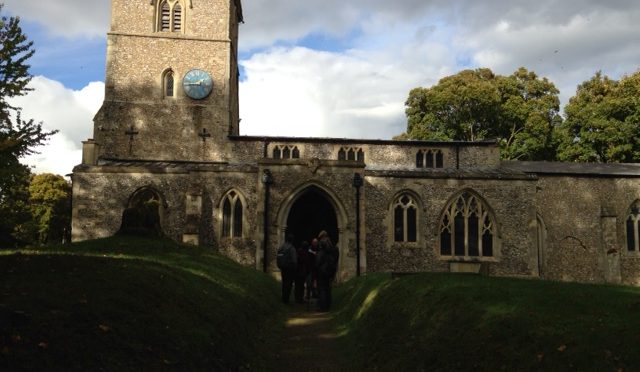 Nine walkers met at Saunderton station for an 8 mile walk in the Chiltern Hills, led by John and Caroline.  Although it was sunny everywhere else, the mist had descended on this part of Buckinghamshire and we were deprived of views all morning. After a couple of hours of undulating walking we reached the pub at Bledlow and unusually were almost mud free. We enjoyed a good meal although Pam and Stuart both wanted the last remaining portion of beef lasagne (Stuart conceded gracefully). Just has we were finishing, Mike turned up, having missed the train and done his own walk in the morning. We stepped out of the pub into bright, warm sunshine. The mist had lifted and it was like a different day. John wanted to show us Bledlow Church but unfortunately it was locked. Instead we had a look at the Lyde Garden, a sunken aquatic garden created by Lord Carrington and now open to the public. From there it was downhill for the next hour to Princes Risborough station. Thanks to John and Caroline.