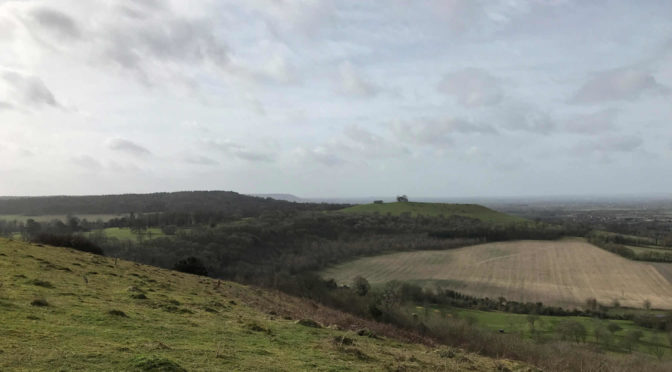 15 Polyramblers assembled at Wendover Station to join this ramble. I decided to shorten the morning’s route by 1 mile to enable us to reach the lunch pub by 2pm, and more importantly to complete the ramble in good daylight. This also gave the party time to admire the new gate donated by the club, which is a short walk down a track very close to Wendover Station approach. So instead of taking extremely muddy paths via Dunsmore and little Hampden, we took the direct Ridgeway track up Bacombe Hill to the summit of Coombe Hill, the highest point of Buckinghamshire at a height of 260m above sea level. Here we enjoyed views to the northwest across to Aylesbury and its surrounding Vale. Also views westward following the line of escarpment towards Oxfordshire. Continuing south downhill on the Ridgeway we passed the boundary of Chequers, via a lane, then onward to another muddyish path and lane until we reached The Plough Inn at Lower Cadsden, our lunchstop.

8 Polyramblers took lunch from the pub menu which I had pre-ordered, the remaining 7 eating their own packed lunches. After lunch the party somewhat split, 3 ending the walk here and going to a nearby bus back to the train. 2 more left early to walk back to Wendover for an earlier finish.

So I continued with a party of 10 where we continued northwards through Pulpit Hill nature reserve, climbing up to Chequers Knapp, steps through Ellesborough Warren, and beside Beacon Hill till we reached a field where we descended down to Ellesborough Church. From here it was mostly a flat walk along the edge of the Vale of Aylesbury, passing Butlers Cross, and more fields with some badly maintained stiles. After a field of ponies at Wellwick Farm, our path continued along more fields, partly bounded by wooden railings each side. At a gate on the left, we crossed a cricket field to a railway footbridge, which led us directly into Wendover Station. We assembled on the platform, and within 10 minutes we were on a train back to London.