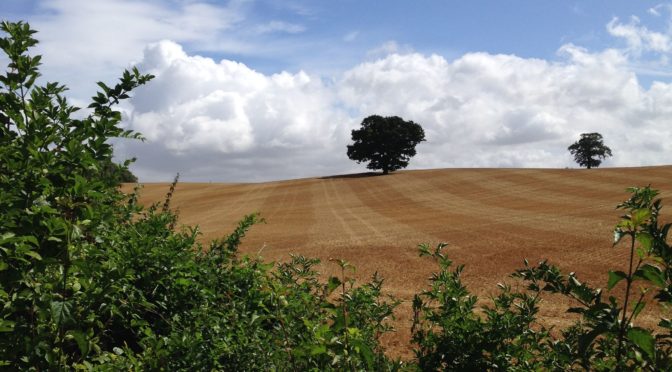 After a few dry weeks, the weather forecast was for rain.  That’s probably why only 5 elite Polyramblers turned up for the walk.  However, we only had 3 showers during the day, one while we were on the train, the second while we were having lunch and the third in the afternoon lasted only 2 minutes.  The train was delayed due to problems with a door so we missed the bus in St Margarets which is only every 2 hours.  Therefore, we decided to do the walk in reverse from St Margarets.  We started with a gentle slope, tasting a few blackberries on the way and walked on a path along arable fields which had been harvested.  We followed a disused railway line that Nigel used when he was going to school.  We joined the river ash which we followed through meadows, passing a herd of lovely Jersey cows before seeing Widford church on the hill.  We crossed the B180 in Hadham Mill and walked through a big grassy field with concrete containers placed at regular interval filled with stones and metal tubes with a lid doted around.  Harriet texted Geoffrey to ask what they were.  We learnt later that the tubes are used for landfill gas monitoring.   After entering a field, we saw the first of Henry Moore’s sculptures by a pond filled with water lilies.  We followed the hedge along Henry Moore’s garden and could catch a glimpse of more sculptures through the trees.  We had lunch in the newly opened visitor centre in Perry Green (nice cakes).  We saw more sculptures in the nearby woodland and fields and continued our walk to Hadham Cross and Moore place before reaching Much Hadham.  There was not enough time to reach Little Hadham, the end of the walk, as the last bus of the day was at 16.30 so we went to the Forge Museum where we had tea and learnt about Moore Place and Much Hadham.  The lovely church, with beautifully embroidered kneelers, has a window sketched by Henry Moore and the entrance is adorned with two sculptures by Henry Moore.  We caught the16.30 bus for a hair-raising journey back to St Margarets station.  As it is such a lovely walk, I will probably do it again next summer to ensure that nobody misses out.