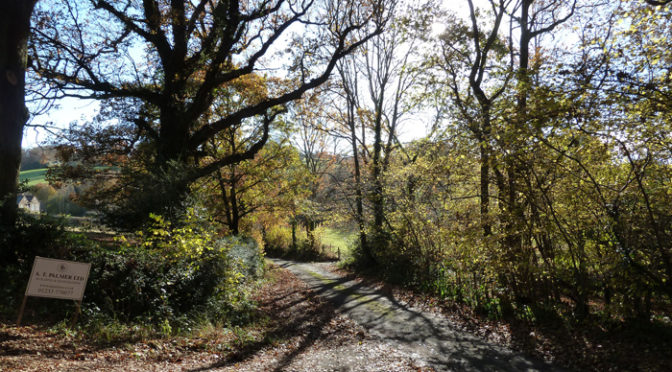 A slightly disappointing turnout of five was met at Wadhurst by Kim & Siew Kee. The weather forecast was for rain later but we were blessed with some lovely warm sunshine as we set off north along the Sussex border path. The cold weather had brought down a lot of leaves but there were plenty still on the trees to form a golden canopy as we passed along an old sunken way. There were signs of preparing for winter, with fields now empty of crops, and sheep with their winter coats on. We stopped at Cousely Wood and went into the Old Vine Inn. This is a lovely pub – a fine old building, beautifully restored. Only time for a beer and a sandwich, but made a mental note to return for a meal – the menu looked most appetising. It was beginning to cloud over as we emerged and continued to Bewl Water. We enjoyed  fine views as we walked along the southern edge, before turning inland. At this point it started raining and it was apparent we still had a fair  distance to go. The going became slippery in places and one or two of us had minor tumbles. It was almost dark as we reached Wadhurst by which time it  was raining steadily. We were grateful for occasional street lights for the  last leg to the station, where fortunately we had only a short wait before a nice warm train arrived. Despite  a somewhat soggy conclusion, overall it was great day’s walking – Many thanks to  Kim for leading us.