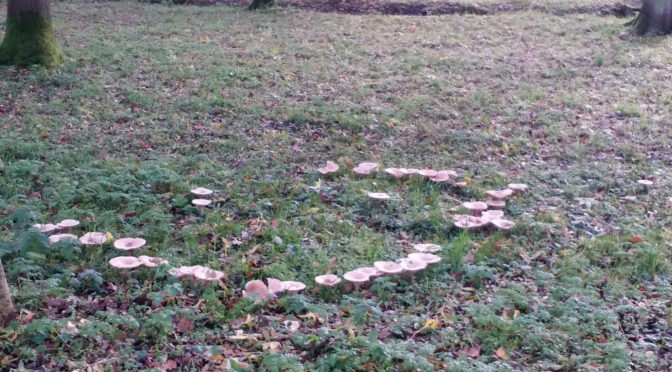 Fifteen walkers set out from Effingham Junction station on a cold, but initially sunny day. The group passed the 16th century Norwood Farm, a nice fungal fairy ring and a herd of alpacas before walking through Great Mornshill Wood.  We then walked down a long bridleway before reaching the village of Little Bookham and along the main street to see a 15th century cottage, which looked as though it was about to fall down!The next stage of the walk took us to Effingham village, passing the 12th century All Saints Church and later St Lawrence’s Church where Sir Barnes Wallis, inventor of the bouncing bomb, is buried.
On reaching the village, we rested at The Plough pub. Two walkers felt they had done enough walking for the day and decided to catch a bus back to the station. Unfortunately, they missed the bus they were scheduled to catch and had to remain in the pub for another hour. Poor them!

The rest of us headed off to Great Ridings Wood, managed by the Woodland Trust, and across a saturated Effingham Common back to Effingham Junction station. The leader and assistant deserted the group before the final approach to the station to get back to where they had parked their car. If you read this the rest made it back safely! Thanks to all the walkers who joined this great expedition through a small part of Surrey!