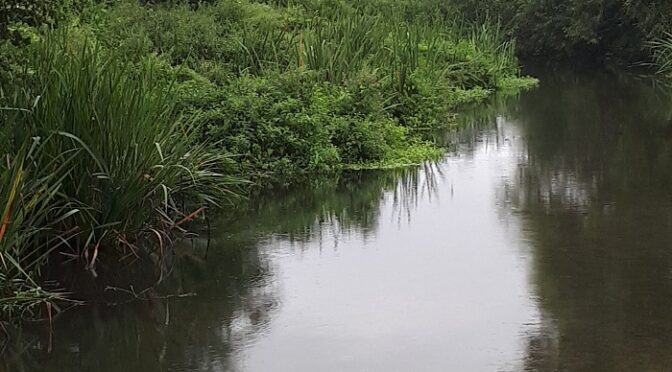 Twelve ramblers met at Little Chalfont and Latimer station to begin our walk. It had rained the night before so unusually there was some mud underfoot.We walked through some woods and then followed the waymarked path over fields until we reached the river Chess. We admired a view of the tall gables of  Latimer House on route. We followed the Chess path stopping to admire a cormorant before stopping for some elevenses at Latimer village Green. Carol had thoughtfully made some ginger flapjacks for us. We continued to the Water Cress farm and climbed the one moderately steep hill of the day before reaching our lunch time picnic destination of Holy Cross church built of flint in the 12th century. The church has a number of lepers buried there. I over heard a small child taking about Leopards leaping about the graves, a slight misunderstanding!A few of us had lunch at the Cock Inn near to the church whilst the rest of us joined them for a very pleasant drink following completion of our picnic. We were lucky as the rain at this point had stopped.After lunch we followed the route downhill back across the River Chess through some woodland until we reached the model estate village of Chenies. The village was built in the 1850s by the Duke of Bedford owner of the grand Tudor Manor House of Chenies.Crossing the village green, we walked up the drive of Chenies Manor and passed the 15th century church of St Michael We entered woodland and walked along a stony path with wonderful views of the Chilton’s before we completed our walk back at the station. A very relaxing walk only marred by some showers on route.