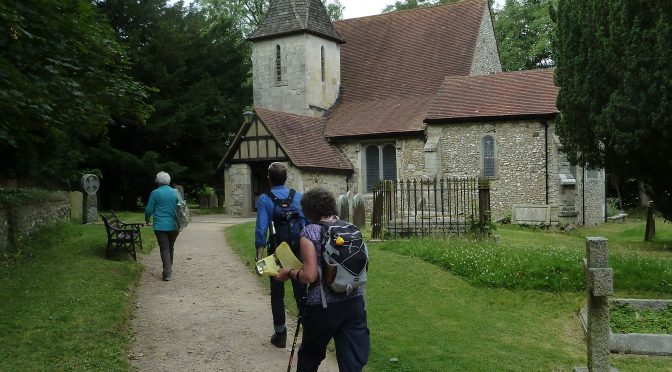 Nineteen Polyramblers set off from Coulsdon South station in search of real countryside in zone 6. Within minutes we reached a path through ancient yew trees along which we walked for almost a mile before entering Happy Valley. We climbed uphill and followed a terrace enjoying impressive views and the wild flowers before dropping back down into the valley bottom and continuing to Coulsdon Common. Crossing from Greater London into Surrey brought us to the North Downs Way and the Surrey Hills. We stopped for lunch at the Harrow pub’ which served real ale but according to Kim the most boring three real ales in the country! He was somewhat placated by a good, if expensive, craft beer. Suitably refreshed we followed an undulating path with good views of Greensand Hills to the south and also the London skyline. Leaving the North Downs Way we admired the attractive fifteenth century Tollsworth Manor before walking through Alderstead Heath and visiting Chaldon Church famous for its Doom wall-painting dating from around 1200. Passing between fields of wheat and barley we re entered Happy Valley and onward to Devilsden Wood where Old Nick did his best to get the leader lost. Team work and technology saw us out of the wood and onto Farthing Down an important archeological site with evidence of human activity for some 6000 years. We crossed the Down disappointed at being unable to identify the Saxon burial mounds but charmed by the song of skylarks and retraced our route back to Coulsdon South station.

Yes we found countryside, even wild raspberries, and some of us had not walked over 10 miles for a while or were nursing ailing limbs so well done to them.