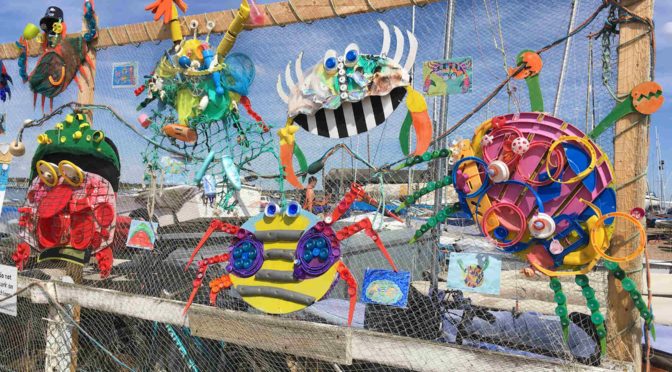 After a long but smooth journey, 8 Polyramblers arrived in West Mersea to be met by Gini who was spending the weekend with a friend who lives on Mersea. It was sunny but not too hot and the tide was coming in when we started our walk clockwise out of the small town. We passed lovely houses and were soon on the sea wall. The first part of the walk was quiet with tidal flats on one side and farmland on the other. We had our picnic lunch facing the Pyefleet Channel and continued along the sea wall. Each pace we took resulted in clouds of common blue and small heath butterflies.  As we walked to the tip of the island with Brightlingsea on the other side of the Colne estuarty, the path became busier with holidaymakers strolling along the beach.  We followed the Blackwater estuary and stopped for an ice cream at Cudmore Grove Country Park and continued along the beach, passing a few caravan parks. It became cloudy as we walked along bits of the sea wall that had collapsed. We reached the pretty beach huts of West Mersea and, as we walked through the town, we were grateful to see our bus coming towards us just as we were passing a bus stop. Very fortuitous after a lovely 13 mile walk.