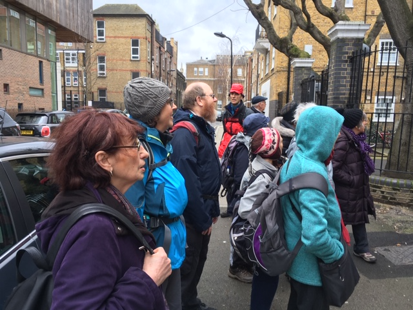 Saturday 15th February. 15 of us braved the weather to undertake a linear 5 mile London based walk from Euston to Angel. The walk took us round Somers Town at the back of Euston, St Pancras and Kings Cross. There are several remarkable buildings in this area, notable because of their residents, or architecture, or historical significance. They included the Elizabeth Garrett Anderson Hospital, The Polygon/Oakshott Court where Dickens lived and Mary Wollstonecraft (mother of Mary Shelley) died. The Sidney Estate displaying beautiful Doulton Ware ceramic panels and carved finials in the courtyard with hooks to hang the washing lines to dry clothes. The Ossulston Street Estate was impressive – influenced by the Karl-Marx-Hof in Vienna. Opposite we enjoyed visiting the Story Garden – a member of the charity co-running this site gave us an overview of the purpose of this garden for the next 3 years. We passed a Portuguese  cafe – although closed at weekends it is well worth a visit and like other places in Somers Town adds to the history of the area along and also sells delicious custard tarts.
Walking along the few remaining rows of Victorian houses (Brewers Company Estate), that survived demolition in the 20th century, we arrived at Goldington Buildings with an impressive entrance and coloured brick work. Then onto St Pancras Hospital which had originally been the Work House. A hidden gem is the Old St Pancras Churchyard where Sir John Soane and his wife are buried as well as Mary Wollstonecraft. There is still a very old church on this site. It has been a place of worship since the 7th century. We then passed the German Gymnasium – the first gymnasium to be built in England – now a restaurant. Lunch was spent individually exploring the development behind Kings Cross.
Additional local information included the origins of the Pearly King tradition with Henry Croft who cleaned streets around St Pancras, the structure of the roof of St Pancras based on the beer warehouses up north and Sir John Betjeman’s role in saving St Pancras.
We then walked along the canal towards Angel. Again there were some historical references which included the gathering of 100,000 people in support of the Tolpuddle Martyrs in 1834 in the area of Copenhagen Street. The walk ended in the Camden Head Pub – which still displays a lot of it’s original features.