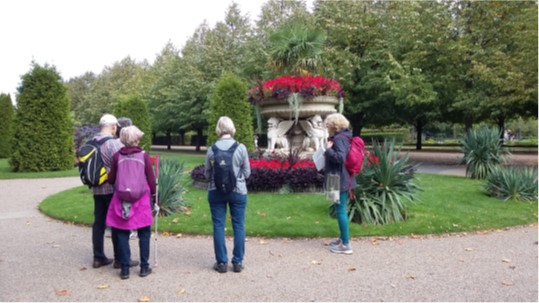 We left Regents Park Tube Station in 2 groups of six with a staggered start. Turning left we admired Park Crescent which was originally planned by Nash and was renovated in the 1960’s.
The walk was varied and had some special moments, such as hearing about the “Nannie’s Tunnel” running under The Marylebone Road connecting Park Crescent with Park Square.

Going along Park East looking up at the beautiful facade on the right is the lettering “Diorama”.  An unusual building – numbers 17&19 are built as one facade at the front and opening out symmetrically behind to apparently exhibit 2 enormous pictures. Just beyond is St Andrews Place – a haven of tranquility housing The Royal College of Physicians. Each faculty has a small garden laid out with plants known for properties to do with each speciality and at the end is a garden open to the public. There are guides to the various plants. The Squirting Cucumber features in a photo with Mick and Dolly.
Heading into the park – we made for Avenue Gardens to the left of the Broad Walk which provides a colourful wa l k – b e a u t i f u l l y planted flower beds -bright colours . On reaching the Griffin Tazza, we headed for the Chester Gate exit and walked along the beautiful Chester Terrace, designed by Nash and built in 1826. Then onto Cumberland Terrace – with its elegant architecture and statues and a relief featuring Brittania.

Rejoining the Outer Circle took us to St Katharine’s Precinct and the Danish Church. A copy of the Jelling Stone which is an exact replica of a monument with the same name in Jutland. It dates from 980CE Passing another beautiful Terrace we came out at Gloucester Gate and curved round to Park Village West – another haven of beautiful houses and gardens – very peaceful. Ruth Rendell used the location for one of her books.

Lunch varied with some of us lunching at the York and Albany, while others had picnics and visited local cafes.

We then made our way back into the park past The Matilda Drinking Fountain, 1878 featuring a bronze milkmaid figure set in a Cornish rock structure. We passed the Ready Money Drinking Fountain gifted by Sir Cowasjee Jehangir 1869 as a thank you to the British people for protecting the Parsees in British India.  An intricate gothic, granite and marble monument. Crossing the outer circle we walked beside the canal with London Zoo on our left passing under The Macclesfield “Blow up” bridge. There was a real accidental explosion in 1874 – barrels of petroleum and gunpowder. We then headed for the boating lakes passing beautiful wooden life size sculptures The Central London Mosque was ahead and Hanover Terrace provided another detour to look at more architecture. Various architectural buildings were to be seen across the lake. We then headed for the tennis courts which used to be flooded in winter for ice skating and was originally the grounds of the Toxophilite Society hence Archers Lodge.

Finally we entered the inner circle into Queen Mary’s Gardens. Around the lake there’s a Chinese bridge, a bronze eagle, amongst other things. We were greeted by the perfume from the rose garden. The Open Air Theatre was holding its matinee so live entertainment as well. There are several statues and fountains but time was passing and we were making our way to Clarence Gate. On the we passed a bandstand which had been moved from Richmond Park. It is now a memorial to 7 soldiers killed in a terrorist attack in 1982.  We then headed for Baker Street tube Station passing the Sherlock Holmes Museum.

Photos taken by Mick, Joyanna and Gillian
Thanks to The London Footprints Walk Regents park 2008