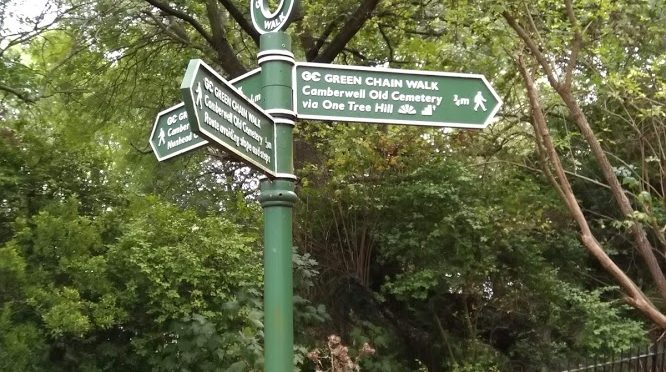 Following a summer of beautiful walks in the countryside 16 Polyramblers set off on an urban walk celebrating S.E. London’s green spaces in many of its guises.  We started with a circuit of Nunhead Cemetery, one of the”Magnificent Seven” Victorian
Cemeteries and now a Site of Metropolitan Importance for Wildlife, home to songbirds,  woodpeckers and tawny owls. We paused to view several monuments, some elaborate, some poignant and most ravaged by nature and vandalism.
We then followed a steep footpath between the cemetery and a grassy reservoir descending again past allotments to join the Green Chain Walk as it threaded its way between two parts of Camberwell New Cemetery. Another steep path brought us onto One Tree Hill, a wooded nature reserve. Passing the Oak of Honour, which marks the site of an Oak under which Queen Elizabeth 1 is said to have fallen asleep on Mayday 1602, we reached the summit and stood on a concrete platform constructed during World War 1 as an anti-Zeppelin gun emplacement to enjoy fine views over London and beyond.
After descending the hill a stroll through Brenchley Gardens led us alongside (but not through!) our third cemetery of the day to our lunch stop at Peckham Rye Common where William Blake had
visions of angels in 1767. Suitably refreshed we made a circuit of Peckham Rye Park including the lake, Japanese Garden and Community Garden before returning to Nunhead station, pausing en-route to examine a totem pole imaginatively carved by Morgan Ivo in 2014.