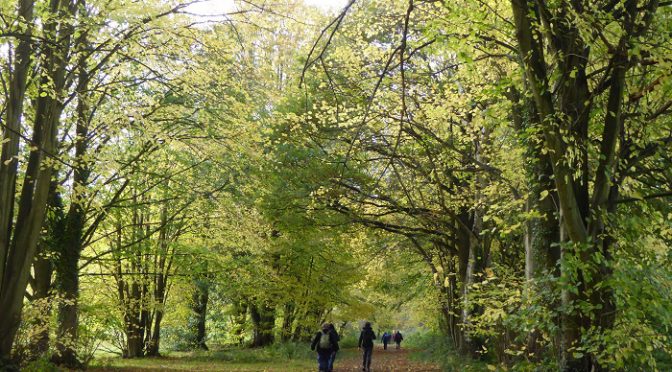 Sunday walks are unusual for the Polyramblers these days but on this weekend it was fortuitous as the weather was so much better on Sunday than on Saturday. We enjoyed mainly blue skies, sunshine and hardly a breath of wind for a lovely walk in the Surrey Hills. Fourteen Poly Ramblers, including a rare appearance from the Honorary Treasurer, set off from Dorking station. We started on the busy A25 but soon reached the sanctuary of the prosperous lanes of residential Deepdene. An uphill walk took us to the Deepdene estate and its Terrace, the highest point on the walk with great views. Deepdene was once the greatest house in Dorking with a huge estate, owned by Thomas Hope, banker, polymath and eccentric. The house was requisitioned by Southern Rail in WW2 and has since been demolished. Most of the group did a circuit involving a flight of slippery stone steps, tank traps and the top of a staircase to a wartime tunnel network used by Southern Rail.
Retracing our steps we continued cross country towards the village of Brockham. The village is famous for the biggest Guy Fawkes celebration in Surrey. We arrived the morning after the night before but not too late to watch children toasting marshmallows on the still-smouldering embers of the enormous bonfire. We watched the Rampant Roosters (red, green and yellow) and Black Swan Border (purple and black) Morris dancers entertaining the crowds outside the Royal Oak. The queue for the bar was long but those who needed sustenance managed to get soup. Had we stayed a little longer we could have witnessed the Morris Dancers performing their burning of the sticks ceremony at the bonfire.
Our next stop was the ruins of Betchworth castle. Once a grand manor house it was intentionally ruined in Victorian times to provide stone for Deepdene. Now it’s a not very romantic ruin with a reputation for being haunted but with lovely views of the lake and River Mole from the terrace. In 2011 it was purchased for £1 with the promise of conservation. All I can say is that the buyer has a big job on their hands. After another half hour of woodland walking we were back in Deepdene and Dorking. Thanks Susan for finding such an interesting walk.