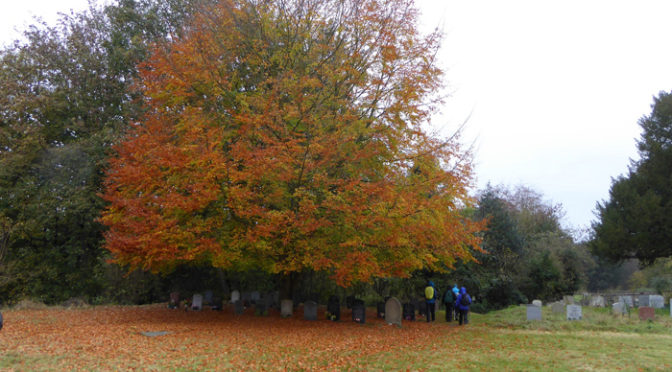 Despite the dire weather forecast there were still some stalwart and courageous Polyramblers who turned out for this walk. Contrary to what we had been led to expect, we were rewarded with blue skies and bright sunshine although the wind was keen but that just encouraged us to keep up a good pace. Green shoots were bravely peeping up in the ploughed fields and we were treated to wide open skies and spacious views of the surounding rolling farmland. We got to the Fleur de Lys at Widdington before it opened and the medieval Prior’s Hall Barn is only open from April to October so we pressed on past the currently closed Mole Hall wildlife park where, strolling along the road, we were surprised and delighted to see two peacocks. One strolled nonchalantly through the hedge into the grounds of Swayne’s Hall, while the other one flew up onto an outbuilding to join a third peacock!
The paths between sheltering hedges took us past fields with more views over the valley and past a field of mixed millet, sweet corn and barley. We discussed whether this crop was for animal feed and why it hadn’t been harvested like the surrounding fields. We decided to hasten on to Debden while the good weather lasted and took our lunch break in the bus shelter for shelter from the icy wind! Then we made our way past an excellent variety of cottages decorated with pargeting in gaudy colours and different designs, for pots of tea by a log fire in the Plough at Debden. At least they were willing to sell us tea.
When we emerged we noted moisture in the air and donned our waterproofs. The light drizzle turned into steady rain which continued until we arrived back in Newport at 3pm via the Debden valley. That didn’t give us enough time to get to the station at the other end of the village to catch the 3.13 train,so we went to examine the gruesome gargoyles on the parish church, which was locked even though it was Sunday, so we weren’t able to visit the interior and see the 13th century altar chest. Harriet and I decided on a drink in the pub in the High Street, drying off by a log fire and chatting to a friendly local resident. As the pub didn’t serve tea, the others went off to explore the convenience store (just about the only one of the few shops in the High Street which was open) and we met again at the station to catch the train home as darkness descended on the countryside.
To answer the question “Why Newport?”, according to the Oxford Dictionary of British Place Names, Newport means ‘new market town’, Widdington means ‘Farmstead or village where willow trees grow’ and Debden means ‘deep valley’. Therefore the Debden Valley must mean “the deep valley valley”!
Thank you to the brave Polyramblers who joined me on Sunday and made it all worthwhile!