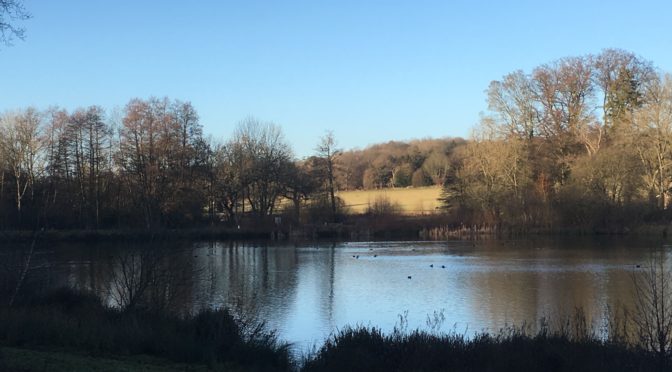 A sunny but chilly day for the first walk of the year through woodland and fields in the beautiful county of Hertfordshire. 11 Polyramblers turned up to walk off the excess of Christmas .  We walked along country roads before going through fields and woods (muddy but not too much), the outskirts of a quarry and more quiet lanes.  We reached the Cowper Arms in Cole Green, where we were lucky to find a table in a bay window.  Feeling invigorated after our lunch, we continued walking along fields to Birch Green.  We crossed the A414 and I took a wrong turn which meant walking approximately an extra mile.  We reached Panshanger Park, created by Humphry Repton in the late 18th century with other parts previously landscaped by Lancelot ‘Capability’ Brown.   It was opened to the public in 2014 after restauration following gravel extraction (which is continuing for a few more years).   We followed the river Mimram, one of the rare chalk rivers in the UK, passed between two lakes and went up to the Great Oak, reputedly planted by Queen Elizabeth I.  We saw the remains of the orangery and the site where Panshanger House once stood.

Wikipedia says: “Following the death of the 7th Earl Cowper in 1905, the estate was inherited by Lady Desborough and, after she died in 1952 with no heir, the estate was sold in lots by auction the following year, but there was no interest in the house itself and it was demolished between 1953 and 1954.”

The country park is very popular as there were many walkers and families enjoying this green space.  We continued our walk along a lake and the river before reaching the outskirts of Hertford and Hertford North Station.