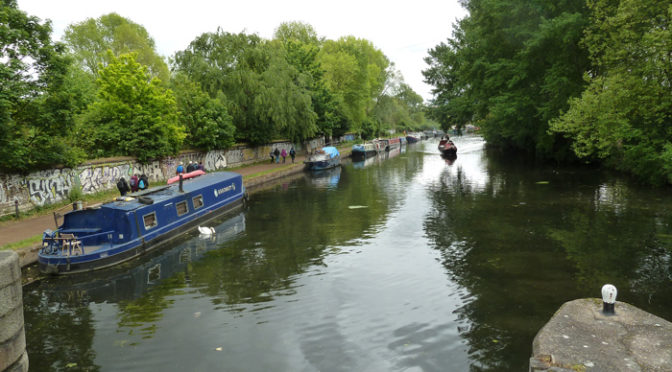 A respectable  16 of us assembled at Tottenham Hale station on a chilly and overcast morning. Our route followed  the Lea navigation, initially leafy and almost rural as it passes through Clapton. There was plenty of bird activity with sets of ducklings and coots with the occasional predatory heron on the lookout for a snack. Approaching the Olympic Park, things became distinctly more urban, with some interesting street art. We lunched at the attractive Timber Lodge café, which was doing good business. We sat outside, trying to convince ourselves that it wasn’t really that cold.Passing through the Park, we reached the impressive House Mill on the Lea. This listed building dates from the end of the 18th century and is the oldest surviving tidal mill in the world. From here, the Limehouse cut was formed,, a new navigation giving better access to the Thames and London. This final section is a mixture of decaying industry and smart apartment blocks ending at Limehouse Basin.  Here the sun finally made an appearance as we looked out on to a somewhat choppy Thames. Here we said our goodbyes – a number going on to enjoy tea at the Yurt Café, Danny and myself going to the nearby Old Ship – a very pleasant traditional East end pub.  Our thanks to Sarah for her planning and leading.

Thanks to Pam for her photos