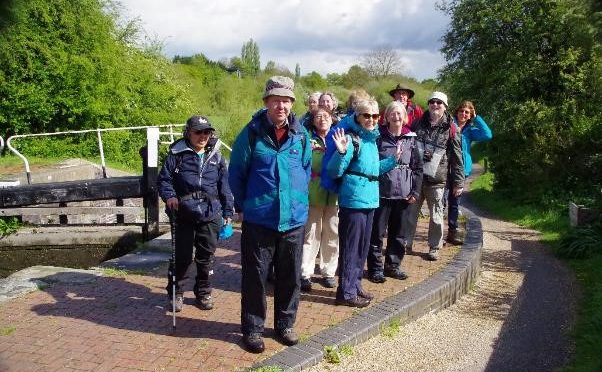 Nineteen Polyramblers gathered at St Albans City station. I led them towards the Cathedral in the city centre, then put it to the vote whether to take coffee at the cathedral refectory. I did not need to use my casting vote as like the Brexit referendum the noes favoured the ayes by 1 more vote out of 19 and the noes had it! We thus proceeded through the 14th cent. Abbey gateway, down Abbey Mill Lane, over the Ver and across Verulamium Park. The footpath continued past a main road, across several roads of houses, until we reached the quiet of the first field on the edge of the city. Here I explained to the party, that, in AD 209 Roman Soldier Albanus was led out of Verulamium, and executed for refusing to renounce Christianity. The Abbey is built on the execution site, and the tomb of St Alban within. Nicholas Breakspear, attended the Abbey School. He was elected to Papacy in 1154, and became Pope Adrian IV, the first English Pope. In 1877 the Abbey became a cathedral on creation of a new Anglican Diocese.

We continued through fields and a wood and passed beside the National Rose Society grounds. Our route continued around the “confluence” of the M25 and M1 motorways, thence a straight track and lane past Millhouse Farm into Bedmond, the birthplace of Pope Adrian IV. We needed lunch and it started to rain.  Some eager polyramblers sought refuge in a bus shelter to eat their food. We knew The Bell PH did not do lunches. However the rest of the party ordered drinks at the counter, and I was given permission by the publican to eat our food indoors there, to the great relief of all! The refugees joined us in the pub eventually.

Suitably refreshed we continued south down Bedmond High street, turning right at Sheppey’s Lane going westward near the site of the Ovaltine Dairy Farm near the M25, which we crossed twice over footbridges.  Just before reaching Kings Langley we had sight of the Ovaltine Factory in the valley, often visible from passing trains on tne Euston Line. Then we came across the former Ovaltine Egg Farm, an example of 1930s architecture. The track led us under the LNW railway, then turning left onto the road, we arrived at Kings Langley Station where 4 of the party ended the walk, choosing the shorter 7.5 mile option.

I and the rest of the party continued on the full 11 mile option, crossing the road then taking a short path down to the Grand Union Canal. We followed its towpath southwards for 3 miles in the late pm sunshine; we passed under a broad mid eighties M25 viaduct, an older mid seventies M25 bridge(yes there are two M25s here!), passed locks, Hunton Bridge, Grove House Bridge. We left the canal at bridge 167, the footpath into Cassiobury Park, formerly the home of Earls of Essex. We crossed the park via a stream and model railway, and emerged into Metroland style houses at  Cassiobury Park Avenue, which took us to Watford Metropolitan Line station, our final destination and train home.

Photos by Kim and Gillian