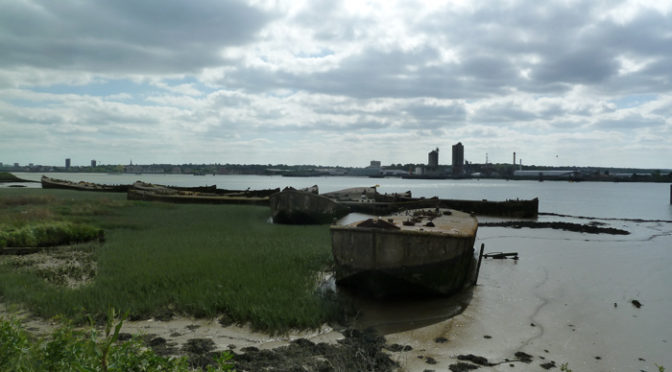 Fourteen Poly Ramblers and two guests converged on Rainham, Essex on a sunny though chilly Saturday afternoon for the last 5 miles of the London Loop.  Some had spent the morning visiting Rainham Hall, others were in the pub and one or twovisited the reptile emporium.  We headed off across the level crossing towards the river, led by Martin and Anna, the latter carrying a large cardboard cake box.  After a mile we arrived at the banks of the Thames estuary, very industrial but not unattractive in a way.

It was then that the cake box was opened to reveal a large chocolate sponge cake iced with Happy Birthday Martin and two boots in the style of the Poly Ramblers.  A bottle of bubbly was produced and we all marked the occasion. Lucy had also made a cake so we were well provided for.  Eventually we continued along the estuary in the warm sunshine with the Marshes on our left, formerly MoD land. We passed the Tilda rice factory, two massive wind turbines and Coldharbour lighthouse and had views of the QE2 bridge in the distance.

Before long we reached the RSPB centre where we waited for everyone to catch up.  After 10 minutes there was no sign of Geoffrey, Kim or Danny.  Perhaps they had dozed off in sun.  We decided they could find their own way back and headed for Purfleet station.  Thanks to Martin and Anna for leading the Loop for the last five years.  Gillian