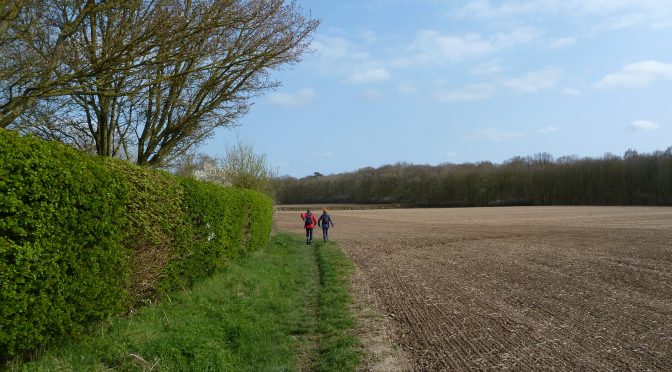 There were just four of us who alighted at Harlow Town, other club members presumably having mothers’ day responsibilities. The weather had turned colder overnight, with a northerly wind but it was thankfully dry. We followed the river Stort before turning north. our route taking us through woods and across pleasantly undulating farm land. There were reassuring signs of spring, with lots of birdsong and plenty of lambs and horses to lift the spirits. We remarked how few other walkers were out and about. There hadn’t been any rain for some time so what might have been muddy sections were easily negotiated. We passed signs for Henry Moore’s house at Perry Green, visited by the club recently on one of Dominique’s walks. We stopped briefly to eat our sandwiches, enjoying faint sunshine. Continuing, we reached the attractive village of Much Hadham and for another short stop in the Bull pub, sitting in a pleasant enclosed yard. Impressive plates of food were being brought out from the kitchen but sadly for us there was only time for a drink. We had completed more than half the walk, and the afternoon was slightly shorter, as we carried on, following part of the Hertfordshire Way. The sky became increasingly more blue and it was almost balmy as we made our way through the outskirts of Bishops Stortford and down to the station. With perfect timing, we reached the platform as our train was drawing in. There wasn’t a lot of conversation on the trip back to London – we had covered a distance of 15 miles in just over 6 hours walking. What a grand day out. Many thanks Jackie for devising the walk.

Thanks also to Pam (who completed and chronicled Rosie’s walk on the day before) for most of the photos and for keeping me company in my customary back marker role. Mike