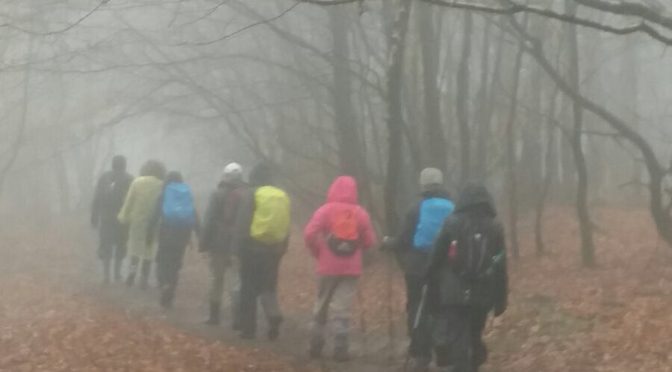 Nine Polyramblers reached the very nice Plough Inn for lunch, although three arrived before the rest after an email malfunction!  I decided after the walkover to start an hour later, but Harriet, Irene and Valeria never received the email notifying members about the change. The nine of us left the nice and warm pub to face the mud, rain and gathering mist, which made for a walk in the woods more akin to a Hammer horror film than walking up to Leith Hill.A rendition of Flanders and Swan’s “Mud mud glorious mud” was heard from the dulcet tones of Hillary and Irene at one stage and Geoffrey and Valeria managed to demolished some fencing trying to avoid a swamp mixture of mud, water and manure!

We decided to take an “All-Weather Route” for the last stage of the walk as an easy option only to find the track as muddy as the rest of the route.  Geoffrey did raise my spirits by saying it was quicker than the alternative muddy environs near the main line railway track.

Siew Kee and I said our goodbyes as we were driving home. We decided to wash our wellies in the local duck pond before we reached the car, but I forgot one of my wellies had developed a split!  A final few squelchy steps ensued!

The organiser would like to thank those who turned up and didn’t duck out at the last minute (Dom) in such poor conditions.