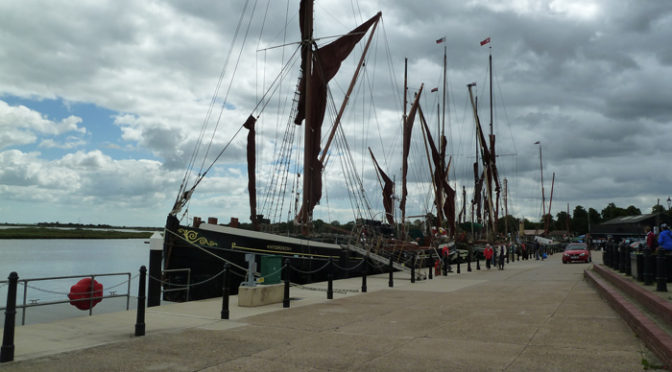 This attractive historic town on the river Blackwater is easily reached by bus from Chelmsford. For our leader Christine it was a trip down memory lane, as  it was at Maldon Grammar school that she started her teaching career in the 1950’s. Our first stop was at the Maeldune Heritage Centre in the main street where we viewed the Malden Emboidery. This 40 or so foot long piece was carried out to mark 1000 years since the Viking invasion of 991 and we were fortunate to have it’s history and salient points described to us by a  knowledgeable and enthusiastic volunteer guide. You can see more about it at http://www.maelduneheritagecentre.co.uk/the-embroidery/.

We continued down to the estuary where there were several beautifully restored Thames sailing barges moored. Some of us decided it was time for lunch and went to a quayside pub. Myself, Sandra and Moira walked round the estuary, enjoying views  of the town back across the water. On reaching Heybridge Basin, we too had a  pub lunch, before returning via the towpath of the Chelmer and Blackwater Navigation,  maintained, for pleasure boats nowadays,  with a lock into the Blackwater at Heybridge.

Christine made a nostalgic visit to her old school, now  the Plume School and   an Academy, and much extended since her time. It was a very pleasant day to be out and about, with a fair amount of sunshine and the rain holding off until we caught the bus back to Chelmsford.

Many thanks Christine for organising it.