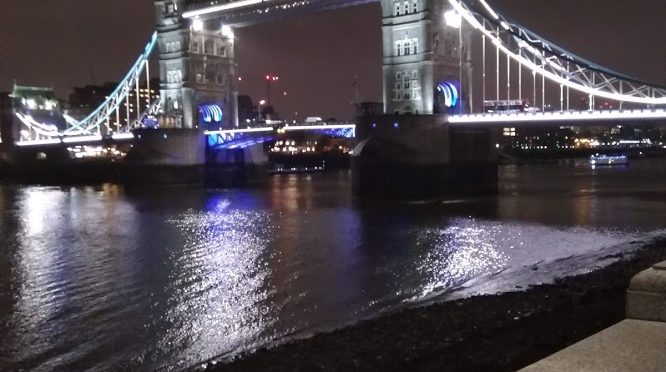 A small group of seven  Poly Ramblers braved the wind and rain on Tuesday evening for a walk along the Thames to see the Illuminated River. Sadly, our leader was unable to join us due to a painful foot, but she provided instructions and information on the bridges and Illuminated River and sent us on our way.

We joined the river at Blackfriars and headed east, pausing to admire the lights on Milennium Bridge and the Christmas lights on the Shard. Around London Bridge we managed to veer off the path slightly but rejoined through Hays Galleria which was splendidly decorated. We passed Christmas market stalls with some enticing smells and after reaching Tower Bridge (the winner for me on illumination) we were in need of warmth and sustenence so headed across the bridge to the Liberty Bounds pub, getting caught in a heavy shower en route. Overall, we thought the Illuminated River was perhaps a little underwhelming but an interesting walk nevertheless.

The Illuminated River is an ambitious new public art commission; it will transform the capital at night, illuminating up to 15 bridges on the River Thames.  Once complete, it will be the longest public art project in the world.  Phase 1 of the project was completed in summer 2019 and covers the Millennium, Southwark, Cannon Street and London Bridges.  Illuminated River is funded through philanthropic sources.  More information on: https://illuminatedriver.london/