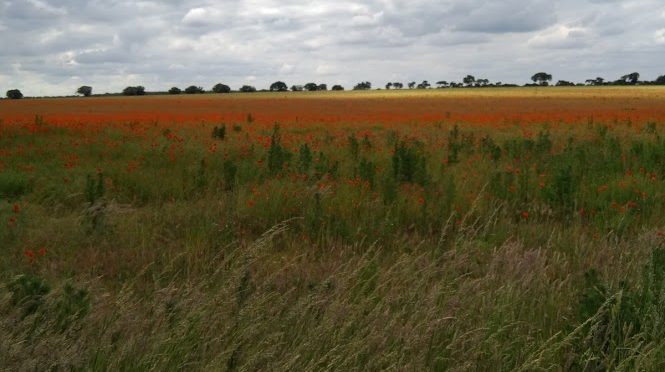 Twelve Poly Ramblers convened at Liverpool Street last Saturday, a last minute change of terminus after we discovered the day before that the train we had intended to catch from Kings Cross had been deleted from the timetable. All went smoothly en route other than a jobs-worth ticket inspector giving some of our group a ticking off for having tickets that were only valid on the Cambridge route.We needed four sets of taxi transfers on the trip and I remember saying to someone as we approached Bury st Edmunds that I would relax once I knew the taxis had turned up. Of course they didn’t and it turned out that my booking had never been put into their system in spite of me phoning them a few days ago and being assured that everything was booked in.  Several phone calls and some frank exchanges  later they did send some vehicles and we finally set off for the village of Icklingham where we had finished back in April. We found the path and headed off in the direction of West Stow Anglo Saxon Village which was just off the route. I had intended us to spend an hour or so there but we had time only to use their picnic tables and cafe for a quick lunch before returning to the trail. We turned north east and walked four miles in the same direction on a wide track through the Kings Forest, planted for George V’s silver jubilee. I thought we needed to get a move on so set a fast pace, but by the time we reached the monument to Queen Mary’s avenue of beeches at the end it was clear that we had lots of time,  so we stopped by a poppy field for half an hour for a rest before continuing towards our taxi pick up point on the A134.  We passed through some lovely heathland, the Brecks, and saw almost no-one.  This is a sparsely populated area.  Although flat, the paths are very sandy which makes walking quite hard work.  Stuart joined us for the last mile or so.  He had come down by car as he had been advised against walking too far with his dodgy leg, so I pressed him into service as an additional taxi.  As we approached the pick up point half an hour early GetAway cars partially redeemed themselves by arriving at the same time so there was no hanging around on a hot dusty roadside.  Twenty minutes later we were setting into our B&Bs in Bury St Edmunds. Some of us managed to explore the town and find a pub before enjoying an excellent meal at Casa.

Next morning GetAway cars and Swan Taxis took us back to the A134 without incident. Our B&B experiences had been mixed – one excellent but the other poor, with a particularly basic breakfast. I then learned that Sunita had to sleep on a mattress on the floor as her put-up bed repeatedly collapsed. Some wise souls had checked the trains online and it had come as no great surprise to find that our return train had also been cancelled.

On with the walk – we continued to the village of Euston (no facilities) through the Euston Hall estate with its outdoor piggeries to pick up the Duke’s Ride, another long straight path which took us to a trig point marked at 49 metres. By this time we were only a couple of miles from the end of the Icknield Way. We crossed the road onto Knettishall Heath, expecting a milestone on the heathland around which we could gather for group photos. In fact the milestone was half hidden in bushes by an enclosed path and we almost missed it.  We continued to the car park where we found a stamp to mark our completion of the Icknield Way and signposts for the Peddars Way (46 miles to Holme-next-the sea) and the Angles Way (93 miles to Great Yarmouth). Harriet suggested that we could do the Peddar’s Way over a three day weekend. Are you sure? Nearby we found an artisan coffee van and from there it was another couple of miles on quiet roads down to the only pub of the day, the Swan at Coney Weston, where we enjoyed a drink before our taxis took us to the station. The train journey back was a memorable one – the group had to evacuate the train after damage to the overhead wires and arrived in London three hours late. Thanks to everyone for your patience and co-operation.