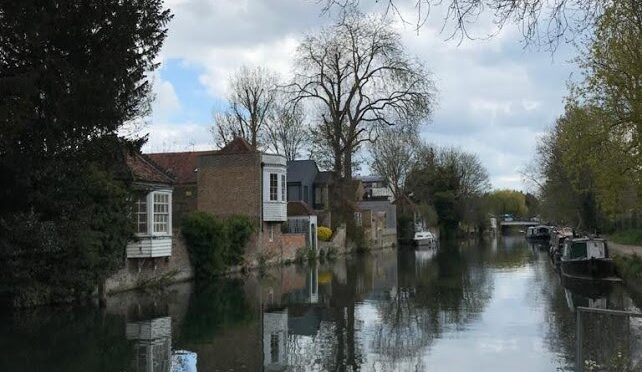 The leader met a few members of the group on the train, but Danny was conspicuous by his absence.  I told them that it was his birthday the previous day and they said: “ Say no more!”.  But he got off the train in Hertford North and, after the obligatory loo stop and briefing, 10 Polyramblers set off towards Hertford town.  We walked through the castle grounds; only the gatehouse of the Royal Castle remains but it is quite impressive.  The route then visited several of Hertford’s other sights: Parliament Square, Shire Hall, the Salisbury Arms and the blue-coat Christ’s Hospital School.  We then reached the River Lee Navigation which we followed to Ware.  We stopped from time to time to feed the ducks, coots and moorhens and saw a pike laying in wait on the edge of the river.  The path along King’s Mead water meadows went around the New Gauge building and under the A10.  After passing Hertford Lock 1 and reaching Ware, we saw the gazebos along the river, a unique feature of Ware.  Another of Ware’s claim to fame is its Great Bed now housed in the V&A.  You can find some information here:  Heritage Trail V4 (waretourism.org.uk)

It was time for lunch and some had a picnic by the river and others went to the Waterside Inn.  Danny left us after lunch because he was feeling lazy (his words).  We continued along the high street where many of the buildings were inns in a former life; they are characterised by the wagonways for coach and horses.  Ware was a crossing point over the river Lee on the old road to the north.  We passed the huge site of GlaxosmithKline and, after a small climb, crossed the A10 bridge.  We followed a lane along and across pasture into woodland and descended to the valley before going up again to reach St Leonard’s Church, Bengeo, the oldest building in Hertford dating from the early twelfth century – but it was shut. After passing a lovely thatched cottage, we followed a path downhill on the edge of Hartham Common.  Back in Hertford, we passed an art galley with tables and chairs outside and the group rushed in at this sight hoping for a cup of tea.  After a relaxing break with a cuppa, we made our way along the river Beane (the fourth river we met today after the Mimram, Lee and Rib) back to Hertford North Station.  It was lovely to see fellow Polyramblers after such a long time.  Let’s hope we won’t have any more interruptions to our programme of walks.