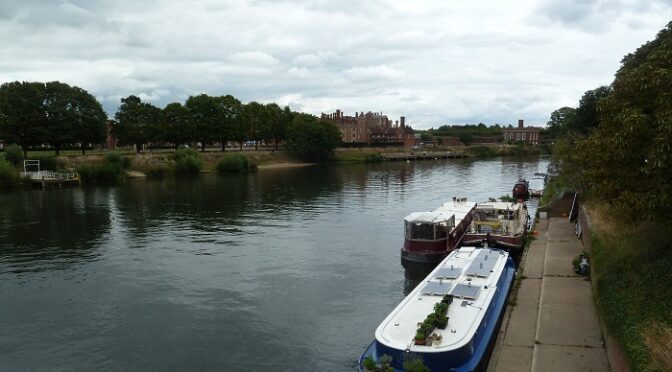 Seven Polys plus leaders Sandra and myself  met at Hampton Court station. A surprising number of people got off the train, this due to a bank holiday fair in the palace grounds. We hadn’t seen each other in person for 6 months and comparing notes, we all seemed to be in the cautious category regarding the Virus.
It was a touch autumnal and crossing the Thames bridge towards the palace, some of us already wished we had brought our gloves. Turning down the towpath towards Kingston, we were amazed to see 3 women swimming in the river. They were towing orange markers, but seemed to wearing ordinary cozzies rather than wet suits. All power to them. A brief internet search suggests that this is the second best wild swim site in London (after Hampstead ponds obs) partly because of the easy sloping bank access on the Surrey side.
We were not alone in walking the riverside path but there was plenty of space and everyone was observing social distancing.
We turned into Home Park, the large space to the east of Hampton Court Palace. We walked along the Long Pond, with its lovely view of the Palace in the distance. Walkers were far outnumbered by Canada geese.
We struck north and went into Bushey Park, second in size only to Richmond Park of London’s Royal Parks. In theory, enough room for all, unless you’re a cyclist apparently. We were walking across a grassy space and a middle aged male cyclist took issue with us for not jumping out of his way, despite the fact that there was 100 metres of clear space on either side. Words were exchanged, the Poly’s more than matching his insults.
All credit to Royal Parks for keeping the café and toilets at the Pheasantry open – they were doing good business despite a few spots of rain. We had our picnic lunches in the Woodland Gardens, big thanks to Dolly for bringing  a lovely cake for us all.
Keeping well away from a hornets’ nest, we reached Upper Lodge, built by the 1st Earl of Halifax. For much of the 20th century, this was home to the Admiralty Research Laboratory. There’s a small enclosure containing a large gear tooth, and a hard to read  so called interpretative board. Andrew has subsequently found some historical web sites but in essence, the gear wheel was part of the drive system for a large rotating beam,which would pull model submarines through a ring shaped water tank. The whole installation must have been massive – the circular roof was bigger than that of St Paul’s Cathedral. Do take a snoop at the Photos below – thanks Andrew.

There was a reduced train service from Fulwell, so instead we took buses to Teddington or Richmond. It was only a three hour walk, but after a six month lay-off, quite enough for me. Thanks for those who kept me company.