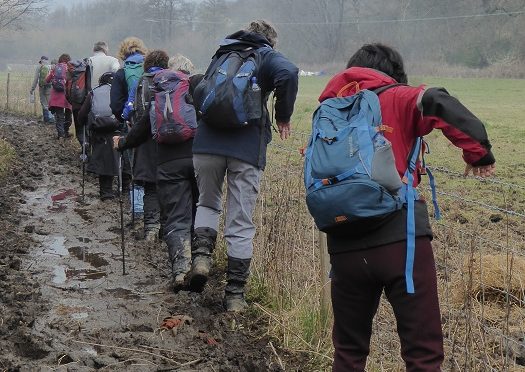 I’ve led this walk in the past and did a walkover in February expecting it to be straightforward. Unfortunately a combination of a wet winter and construction traffic for a new water main meant that large sections of the afternoon walk were verging on the impassable. I devised some slightly less glutinous deviations and hoped for  drier weather in the intervening weeks. No such luck. A respectable 15 of us got off the train at East Grinstead on a dry morning with promise of occasional sunshine later. Passing through the town centre with its interesting mix of historic buildings, we headed east, through mostly woodland. We reached the imposing Stoke Brunswick Hall, parts of which date from the 14th century. Recently an independent school, attended by Winston Churchill, it is now a private residence once again, with its own cricket pavilion. We turned south and made our way to Forest Row. I had intended to pass through Tablehurst Farm and its shop. Unfortunately, I misread the map and we overshot although the group took this stoically. Instead we happened on a pigeon being attacked by a bird of prey – a natural occurrence I suppose but too much for most of us townies.
We lunched in the Swan pub in Forest Row, where the manager was delighted to welcome Gillian and Stuart. They had set up a long table for us and looked after us pretty well, a welcome change from more and more pubs who are a bit snooty about walkers.
Nigel took the bus back and the remaining 14  set off along a disused railway back towards East Grinstead. After a mile or so, I offered the choice of continuing along this level and well drained path or taking my originally planned  route which would undoubtably be  heavy going. Commendably, all but two chose the more mud option. We passed the ruins of Brambletye House, an imposing Jacobean building. Heading west, the path became steadily muddier, culminating in a section by the Weir Wood reservoir where we had to cling on to the chain links fences on either side of the path. After a short climb, the path at last became paved and we were rewarded with farmyard animals to ooh and aah over and  a fine view across to East Grinstead. Normally, two miles of lane walking would give rise to a bit of grumbling, but on this occasion it was the general view that we had seen enough mud.
This was Sandra and my first walk in the UK for a month, our having been in Utah and Southern California where mud and stiles are unheard of. We found it pretty tough so thanks to those that accompanied us and with such good cheer. Though as someone said, we’ve had to become accustomed to such conditions this last winter.
Thanks to Pam and Gillian for the photos.
Mike