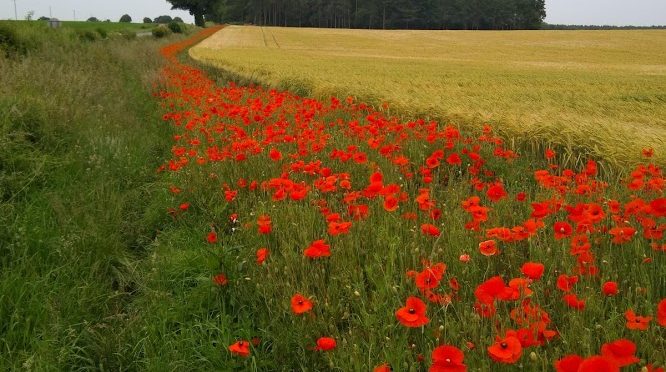 The Peddar’s Way begins at Knettishall Heath in Suffolk and runs for 46 miles north to finish at Holme-next-the-sea on the north Norfolk coast. The path is characterised by being very straight and of course pretty flat.  In this trip I aimed to get us half way to the coast. Thetford is the nearest town to the start point but is severely lacking in affordable accommodation. For this reason most of the group stayed at the Best Western in Bury st Edmunds, while Geoffrey and Harriet stayed in the only B&B in Thetford.  The Bury st Edmunds group enjoyed an excellent meal at Francela’s in the town centre while the Thetford group ate with Harriet’s god daughter who lives locally.

Next morning the two groups met by taxi at the start point at Knettishall Heath car park where we finished the Icknield Way a year ago. I hadn’t quite realised there was another larger car park three quarters of a mile down the road so Harriet and Geoffrey had to start the day by walking back to the start point. We headed off on a woodland path and within half a mile crossed the Little Ouse river into Norfolk.  Our first challenge of the day was crossing the extremely busy and fast A14, not easy at all. The Ramblers should really campaign for a footbridge or tunnel here.  Later we crossed the Ely -Thetford railway, where a tunel was provided, in spite of their being only a few trains per day.  Ironic really.
Our first goal was the Dog and Partridge pub at East Wretham, about 6 miles in. Most of us were starting to flag by then in  the warmth of the day and our heavy packs so we were happy sit down for a reviving drink.
We carried on and soon stopped for lunch on the edge of some woods. We  came upon a large military training area on our left which seemed to go on for miles. Some villages in this area were evacuated in WW2 for military use and remain MoD property. This was also the area for Pingo Ponds. Pingoes are not water fowl as the name suggests, but ponds formed in the Ice Age. We didn’t actually see any as they were off the main path; whether we missed anything is open to question.
We also saw the first two Norfolk Songline Sculptures, and arts project inspired by the Peddar’s Way. It’s a shame they were quite weathered and difficutl to read.  Later we stopped for half an hour on the edge of a field to rest and soak up the sun before the final push into the town of Watton. I offered a shortcut into town but everyone declined. Some may have regretted this after a two mile slog along the road to our accommodation. Meanwhile Dominique and Sunita had a similar long walk to their B&B.  Both the Willow House in Watton, where we also had dinner, and Phoenix House near Little Cressingham were excellent.

The distance for Sunday promised to be shorter – 12 miles rather than 15. About half the group decided to book a taxi to avoid another slog down the road back to the route.
We were back on the Peddar’s Way again by 10am and this time the majority of the walking was on hard surfaces so our feet soon started to suffer.
The guidebook suggested various detours to interesting old churches with wall paintings but our goal was the Blue Lion pub at North Pickenham which we were pleased to find open. The landlord was friendly and welcoming.  After lunch on the village green we started on our last couple of miles of the Way before turning off to the market town of Swaffham. We arrived in Swaffham in time for an icecream before catching the bus to Kings Lynn and the train to Cambridge and London.

Looking forward to the last 26 miles to the coast next year. After that we hope to tackle the North Norfolk coast path.