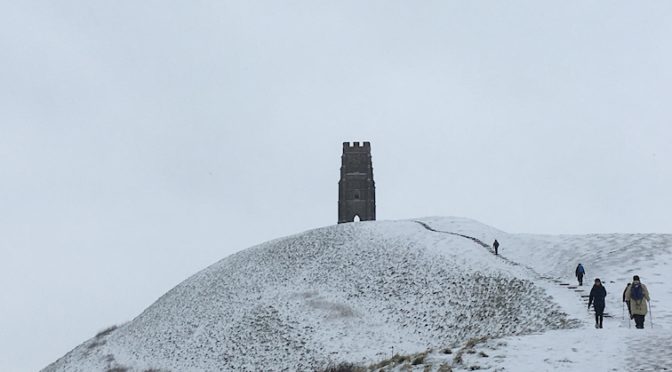 After a train and bus/coach journey, we arrived at the Street youth hostel, the oldest hostel in the South West opened in 1931.  It is an alpine style chalet on the brow of a hill overlooking Glastonbury Tor and the Somerset Levels.  Geoffrey had baked banana cakes so we had tea and cake while waiting for our food delivery and then went to explore Street.  There was a bread shortage at Ocado but,thankfully, we found a McCall that sold bread so breakfast was saved.  We had dinner at The Lantokay, a Wetherspoon pub in the High Street.  Afterwards, a few of us went to The Street Inn to listen to loud live classic rock music and then walked back to the Youth Hostel. Torches were useful because there were no street light for the last part of the walk.

On the Saturday, breakfast was prepared by the B team (there was a small incident with the porridge preparation) and washing up was by the C team.  We then set off for our walk in a very cold wind. We followed part of the Polden Way and enjoyed the extended views from Walton Hill. We went down to the Somerset levels and visited the church in Dundon with its 1700 year old yew tree. A few snowflakes fell on and off but it remained dry. We climbed to the top of Lollover Hill where there was a strong, very cold wind. Mary took a group photo but we are so well wrapped up that it is difficult to recognise who is who.  Lunch was at the Castlebrook Inn in Compton Dundon. A few people could not resist a shopping trip at the Clarks Village and took the bus there while the rest of us climbed back to the Polden ridge to see the Hood Monument and then walked back to the youth hostel via Collard Hill for tea and cake. The A team led by Lorna was in charge of dinner. The excellent 3 course meal included salad with pumpkin seeds and pomegranate, a choice of Portuguese pork and rice or vegetable Dhansak and rice. Dessert was rhubarb and pear crumble and white chocolate mousse. Mmmm

It was snowing on Sunday when we got up and everything was white around us. We had breakfast, packed and tidied up the hostel and caught the bus to Glastonbury. A few people opted to explore the town and its coffee shops and the rest of us went up Glastonbury Tor. It had stopped snowing but it was bitterly cold especially at the top; however, the view was fantastic with the countryside covered in snow. We saw the Hood monument in the distance. Going down was a bit slippery so we took things slowly. We took an early bus back to the youth hostel as there were some worries about transport. A group took an earlier train while others waited in the warm hostel for a later train back to London. Grateful thanks to Danny for organising another successful weekend for 21 Polyramblers.