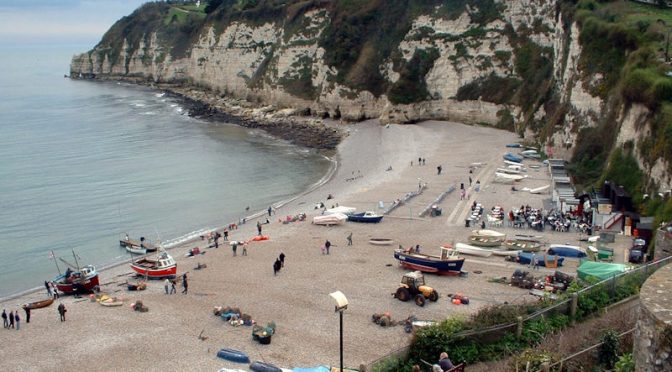 On the Friday, travelling by car, train and bus, 27 Polyramblers made their way to Beer in Devon. 21 to stay in the youth hostel which the club had hired for the weekend and 6 in the Dolphin Hotel. The hostel is a beautiful stone country house located just outside the fishing village of Beer. Standing in its own grounds, it retains many original features, including stripped timber floors and leaded windows.

Those staying in the hostel waited for the food delivery from Sainsbury and had a cup of tea and cake, We then made our way to the Anchor Inn for dinner and met our fellow Polyramblers staying in the hotel. Then it was back to our comfortable hostel for the evening.

Saturday was a very grey and windy day. After a nice breakfast cooked by group B, the Hikers made their way to Branscombe . We followed Quarry Lane then walked through fields and Hazelwood which was carpeted with wild garlic. We stopped at the Branscombe forge and then continued through fields. We struggled along a very muddy steep path to cross a small river. We went up Hole Hill where trees had fallen across the path. We then reached the Fountain Head pub where we had lunch. Afterwards, we went up again only to descend to the next valley and walked to Branscombe Mouth. We stopped at the Sea Shanty where some of us had tea / coffee. We split into two groups, one walking at the top of the cliffs and the second following the South West Coast Path at the foot of the cliffs. When we reached Beer Head, the wind was fierce and it was difficult to stand up. We continued along fields and finally reached Beer where some of us went to the beach and saw three brave souls go for a swim and others had tea and cakes.

The Strollers walked along a country lane, fields and Hazelwood to Branscombe where they had coffee at the Masons Arms pub. They then walked to the Sea Shanty where they had lunch. They returned to Beer via the undercliff path where they struggled with the strong wind after reaching the top of the cliffs. Saturday dinner was cooked by group A, led by Lorna. As a starter, we had pea and mint soup, then there was a choice of Moroccan vegetable tagine or chicken normande with rice and broad beans. Dessert was sticky toffee pudding with cream or custard or stewed rhubarb and custard. Delicious. A few people went to the Dolphin hotel where an Irish band was playing to celebrate St Patrick’s Day. Those who stayed at the hostel had a mastermind quiz with Geoffrey whose specialist subject was The Polyramblers.

What difference a day make! We woke up on Sunday to blue sky and sunshine and a gentle breeze. After breakfast cooked by group C and tidying up the hostel, the Hikers walked over South Down Common to the Sea Shanty for coffee and then lunch at the Masons Arms pub before returning to Beer along the South West Coast Path. The Strollers walked to Seaton where they had coffee and walked on the beach before returning to Beer for lunch. 12 Polyramblers had opted to stay in Beer for another night while others went back to London after another successful youth hostel weekend. Thanks Danny for organising it.