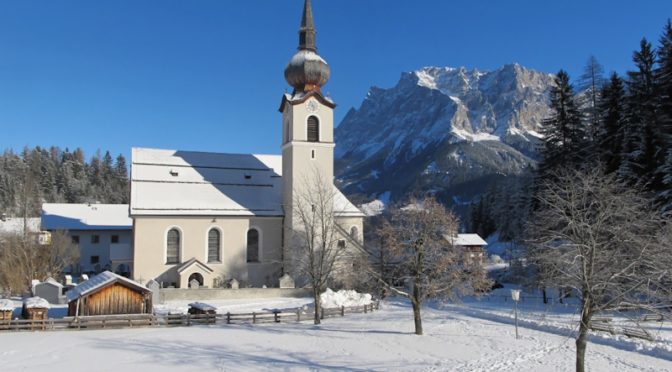 After a delayed flight, 2 trains and 2 buses, 8 Polyramblers finally arrived in Biberwier for a snow-walking weekend. And snow, there was – loads. After settling in gasthaus Panorama, we ate a lovely dinner in a nearby restaurant, Hotel Restaurant Alpina, which became our favourite watering hole.  Some of us enjoyed their first apfelstrudel and others a few schnapps.

Saturday: more snow had fallen during the night but it had stopped when we woke up. After breakfast, we took the bus to the Ehrwald cable car and went up the mountain. We had hoped to do a walk there but the path was shut because of the snow. To drown our disappointment, we headed to the nearest bar and had gluhwein (at 9.00 GMT!). We took the cable car down and walked to Ehrwald where we visited the church and the tourist office and had a light lunch. The sun was out and we walked to Lermoos across the wide valley, checking regularly if the cloud had lifted from the Zugpitze (the highest mountain in Germany across the border). We then walked back to Biberwier and stopped at Hotel Alpina for a drink. After a short rest, we had dinner at the Brabander Alm to see how it compared with Hotel Alpina. It had started snowing by the time we got back to the guesthouse.

On Sunday, no view but heavy snow all day; very different from the previous day. We took 2 buses to get to the Tiroler Zugspitzbahn cable car which was shut because of the wind. So we had a gluhwein in the nearest bar (even though we did not want to go on the cable car). We then walked on a cleared path through the forest and fields of snow to Ehrwald. We were getting wet so we had lunch in the first restaurant we saw – which was Italian and very friendly. Danny went to the swimming pool (free with the guest card) while we walked back to Biberwier in heavy snow. We stopped for a hot drink at Hotel Alpina – before going back to the guesthouse to dry up and rest. Our last dinner was at Hotel Alpina where we ended the evening with a few schnapps.

The best laid plans…. On our last morning, we were going to do a walk in Garmisch but, instead, we spent the whole day travelling to Munich because of a delayed bus, delayed trains and a tree on the line. So, after 3 buses and 2 trains with a stop for a beer in Weilheim, we finally reached Munich. We had a quick tour of the centre led by Danny before making our way to the airport.