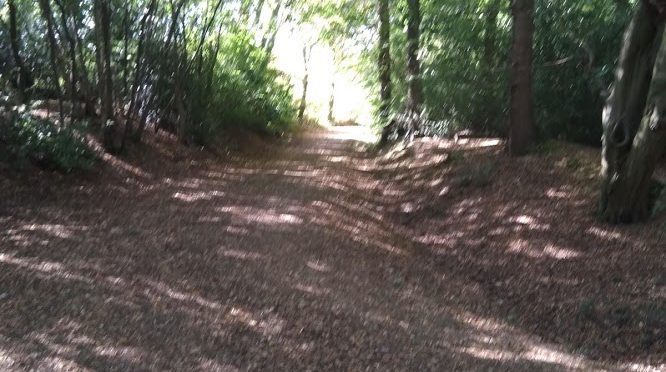 Epping Forest was acquired by the City of London in 1882, and previously in the 1800s many trees were felled for the Navy. Twelve Polyramblers assembled at Epping station, some having been affected by a little tube outage from the northwest and west! Even I was met with a taped off Met line platform at Farringdon and suddenly returned into my Thameslink train, rejoining the tube at the brand new entrance of Bank station.

The walk proceeded over Bell Common, to the top of the tunnel portal above the M25,  where we crossed the road to join the Forest on a track called Forest Side.It was a very sunny dry day and the shades of the glades were very welcome, especially with the green of the leaves against the deep blue sky. Continuing ahead  past Ambresbury Banks, we reached Jack’s Hill where we crossed the B172, and took the Ditches Ride, to a corner of the forest near Debden Green. Here we took a sharp right turn along Gregson’s Ride, turning left onto Goldings Hill and a right turn into the houses of Baldwins Hill. At no. 50 Baldwins Hill once lived sculptor/artist Sir Jacob Epstein who painted hundreds of watercolours of the forest. One of these was used as a London Transport poster in 1934. Another 100 yards brought us to our lunch venue, The Foresters Arms PH,  who very ably served 5 of the party with sandwiches, despite earlier in the day having reservations about providing hot food due to busyness. I had directed the rest of the party to eat their own food on the open lawn across the road.

The walk continued onto High Beach where we had a look in the visitor centre. Then I went to a kiosk by the adjacent pub and invested in a lovely lemon ice cream cornet, it being a very warm afternoon. Martin also bought some whelks from the shellfish stall, but the rest of the party abstained from purchases here. We continued south along the Green Ride until we reached a signpost for Queen Elizabeth’s Hunting  Lodge, which we passed in an open area of the forest, where the afternoon sun was still strongly shining. This Tudor queen was said to ride her horse up the Lodge stairs to celebrate the Armada’s defeat. From here it was a short way round the corner to Chingford station and bus station, where the party suddenly split in half,  one half catching a service bus, me and the rest catching the L23 rail replacement bus as it was just leaving. This being the fastest way back to the tube at Walthamstow.  It was one of the bumpiest rides I’ve had! For the roads were very narrow, residential, and riddled with speed bumps everywhere.  Once on the tube it was a very swift journey back to Zone 1.

Thanks to all who attended.