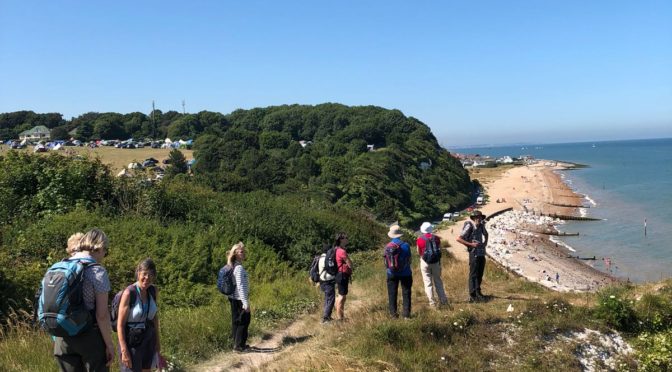 Sixteen members of the Polyramblers walked the Saxon Shore way from Dover to Deal. The numbers were impressive as it was also the final of the women’s Wimbledon tennis championships and the football third place playoff for the World Cup.

We started with the Banksy graffiti art depicting Brexit. It was painted on a building due for demolition but luckily Dover Council agreed to keep it, as it provided much needed colour to a rather run-down area.We continued along the cliff tops dropping down to St Margaret’s bay where we had lunch and Harriet enjoyed a swim. It was a beautiful day with lots of sunshine, a mild breeze and wonderful views.

After lunch we continued our cliff walk to Kingston Downs where we dropped back down to sea level and continued past a large number of memorial benches to finally reach Deal.

We just had time for a much needed drink before catching the train back to London.

An ideal walk for me to lead as I really just needed to remember to keep the sea to the right of me!

Photos by Gillian and Ida