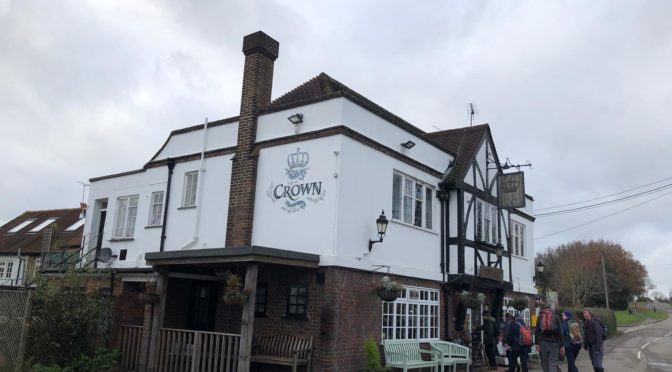 By the time the complete party assembled at Chorleywood station, there were 18 of us.  Although cloudy, it was a mild day and most importantly it stayed dry.  The walk first of all took us through the Chorley wood where weeks of heavy rain had turned the footpath into thick slippery mud and this was how it was for most of the walk.  In one place, there was a puddle that stretched the full width of the road, which we had to wade through.   Our route took us through the pretty medieval village of Chenies and across the front of the ancient manor, seat of the family who gave the village its name. The path then climbed out of the valley of the river Chess to a view point where we could see the undulating hills of the Chilterns.

Geoffrey, who had managed to keep up with the brisk pace I had set  mindful of the limited daylight, at the village of Flaunden dropped out saying he would catch up with us later.  Imagine our surprise when, after dodging balls on the Ley Hill golf club course, we got to the Crown pub and found Geoffrey already there looking very pleased with himself.  I found it hard to believe he hadn’t hitched a lift there, but apparently he had found a short cut walking along the road and had managed to get ahead of us.

We enjoyed a good lunch, which arrived surprisingly quickly considering there were just two staff running the bar and serving lunch to us at the same time.  My own lunch was the last to arrive and rather than hold up the walk I asked for a doggy bag and ate my lunch on the move.  The light was fading when we emerged from yet another woodland and saw the town of Chesham spread out below us.  Descending into the town and then a short walk through water gardens brought us into the historic town centre looking cosy and festive with its many Christmas lights and decorations.  A group of us decided a fitting way to end the walk was with a pot of tea and home made cake in a quaint café.  The rest of the group decided to make their way to the tube station and the train to London.