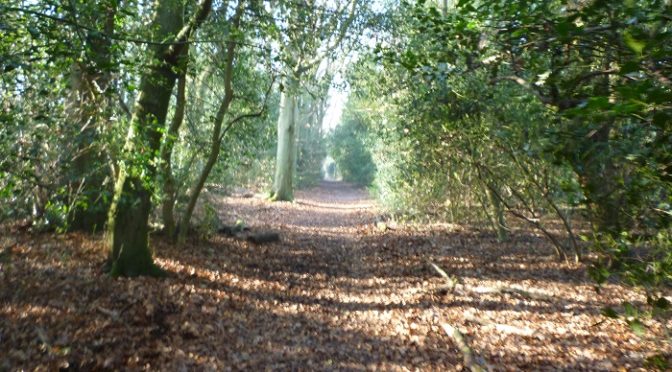 Thirteen Poly Ramblers and Yvonne B’s dog Daisy met at Chorleywood station on Sunday morning in bright sunhine but  below freezing temperatures. We were five minutes up the road when Geoffrey phoned for directions as he had been held up parking his car. Eventually he caught up with the group and we headed across fields with the sun low in the sky.  Normally it would have been a seriously muddy walk but the ground was frozen over which made the going much easier. We passed the old site of Newlands College and Hilary remembered she was once a student there. Soon we reached the Vache Estate and the site of the Captain Cook Monument. This was built in 1781 by Sir Hugh Palliser, then owner of the Vache Manor house. Sir Hugh had many distinctions including Comptroller of the Navy and Lieutenant General of Marines but is best known as the man who picked Cook out for high command. The monument is accessed via a moat and steps to a tower. After viewing and eating chocolate we headed down the road to the village of Chalfont St Giles where the group divided for lunch between sandwiches by the frozen village pond, Costa Coffee and Merlin’s Cave, a rather upmarket (but very nice) pub. After lunch Yvonne and Daisy left us and the rest of the group headed on to Little Chalfont via the Chiltern Way, passing a field of birds similar to but not quite the same as ostriches.  We decided they were rheas.   Avoiding the black ice near a ford we headed up the edge of Harewood Down golf course and out onto the one of the desirable estates of Little  Chalfont.