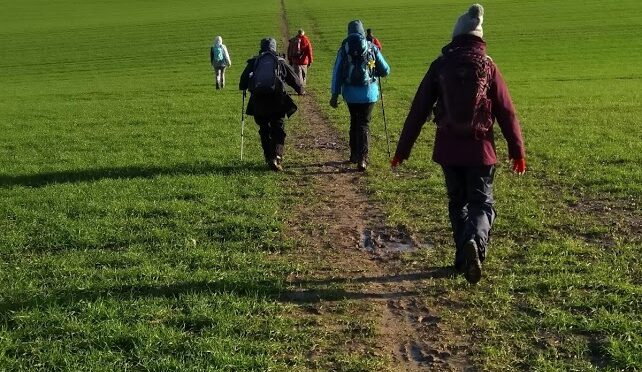 Emerging from the second lockdown, 9 Polys assembled outside Chesham tube station – a 10th confirmed booking was a no-show due to a defunct clutch on the A1 – in winter sunshine (a pleasant surprise after the heavy snow briefly forecast earlier in the week) to listen to the neophyte leader’s safety briefing. He concentrated on one particular piece of road with no footways. Not sure whether he should have mentioned anything else (no – it was absolutely fine – Editor).

We set off on the prescribed route, starting with a mile or so past the alleged site of a Quaker meeting house visited by Cromwell in 1642, in truth located several hundred yards away; a mosque; and a cemetery; before hitting greenery where the advertised steep pitch into a wood had on second thoughts been replaced with a gentle diagonal rise on open fields. The tricky road section proved uneventful, and we slowly ascended on a stony path to Ashley Green. From there we gradually descended through open fields before crossing a fence into a field with four horses, who ignored us as we climbed up to the lunch spot.

After lunch we traversed a caravan park before skirting Bovingdon airfield, disused now but with a WW2 history as a USAF training base. At the far end one could see a VHF omnidirectional range combined with distance-measuring equipment, one of four radio beacons around London aiding navigation to Heathrow along standard arrival routes. No one seemed to recollect that as recently as the end of October and just 16.5 nautical miles away, the Polys had already set eyes on such a Martian-looking contraption near Brookmans Park, during the Bayford walk. We continued past the White Hart pub, frequented in the war by those U.S. pilots, including Clark Gable and James Stewart. Then on past the remnants of a Neolithic fort, which the chronicler found difficult to make out.  On across muddy fields, over a wobbly stile and through a flooded gate back to the outskirts of Chesham and a pavement descent to the tube station. About 8.5 miles.