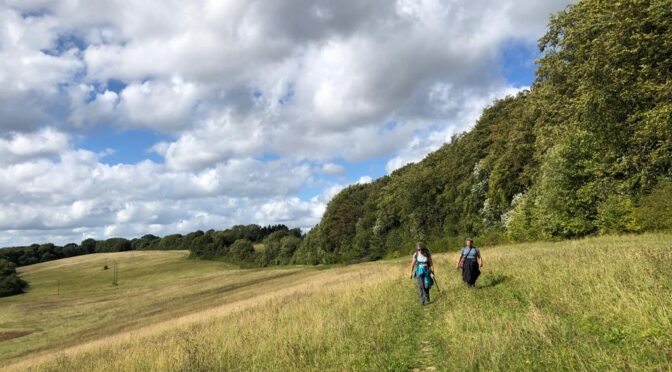 As the title suggests, this walk involved a number of ascents and descents in and out of the valleys to the west of Chesham.  At the station the ten walkers split into two groups with a leader each and we headed off.  Within five minutes Stuart’s group were no longer in sight, lost in the not very socially distanced Saturday market,  and phone calls were needed to re-establish contact.  Once on the right route we were soon out of the crowds and passing Bury Farm.  Then on a single track. country lane that had been quiet on the walkover but was suddenly beset by vehicles trying to pass each other.  We turned onto Blind Lane, once a packhorse trail to Great Missenden, now a sunken bridleway.  We diverted into woods to see the earthworks that was once the 12th century manorial settlement of Reddings Wick.  Only the remains of two moats were visible now.  We paused to view the impressive Pednor Manor, once a maternity hospital annex to the Royal Free.  After a steep climb with awkward steps we stopped for our picnic in a field with lovely views across the valley.  Our pub refreshment stop was at the Bell in Chartridge which several in the group remembered visiting on previous walks.  Everyone seemed very relaxed and I had to remind them that we were only half way and had several ascents to come.  The next descent and ascent was to the village of Asheridge, also with a pub, but sadly no time to stop.  After another descent through woods we contoured around a hill with great views before entering Captain’s Wood.  After one final steepish climb we eventally found ourselves at the back of Lowdnes Park, Chesham and arrived at the station with perfect timing for the 4.57 train.  Thanks to everyone who came along and especially Carol for sustaining us with cookies.

Photos by Ida, Rita and Gillian