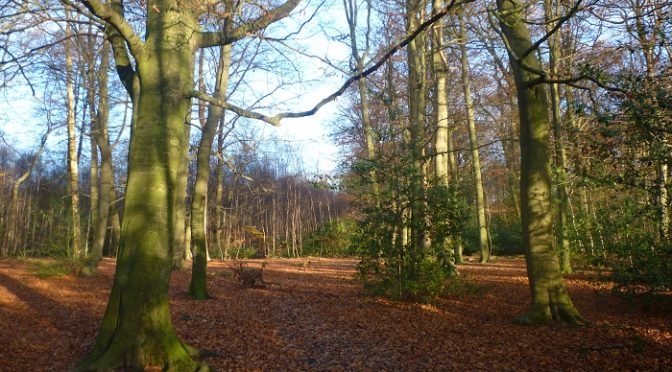 A perfect late autumn  morning in the Chilterns with blue sky and sunshine and frost on the ground attracted 11 Poly Ramblers on Saturday. The walk was surprisingly level and took us through woods and field edge paths east from Beaconsfield to the village of Seer Green and then north to the 250 acre Hodgemoor Woods. It is easy to get lost in woods and Stuart and I almost managed it, having taken the wrong fork early on. But we managed to retrieve the situation with help from the GPS and were soon back on track heading down to the Harte and Magpies on the busy A355. The pub was very friendly and the food came promptly. The pub labrador came to sit under our table and Rob befriended her with chips.During lunch we were joined by new member Ida who had missed the train at Marylebone but was determined enough to find her own way.  So twelve of us set of for the last third of the walk heading south back to Beaconsfield.  I added about half a mile by missing a turn off which meant retracing our steps.   Having completed  the only significant uphill stretch we continued downhill through more woods, struggling slightly to remember the route.  Our relief
at reaching a point we recognised was short lived when we realised that Nigel was no longer with us and no one was certain when they had last seen him. Thankfully a phone call established that he was OK and making his own way back to the town by another route. We must be more careful in future and do more headcounts.

It was only another mile to the town where most of the group enjoyed tea and cake before heading to the station.