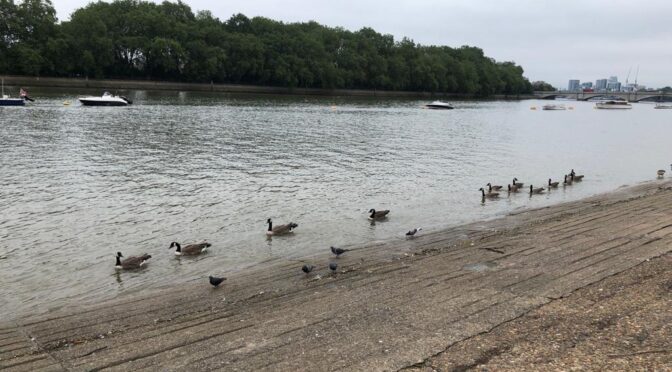 On a rather muggy, grey day 12 Polys set off from Barnes Bridge station in two groups of six. The south Thames path was unusually quiet and there weren’t too many cyclists and joggers for once. The second group with Susan caught up with the first group lead by Danny at Hammersmith Bridge ( we later learnt that they had detoured to the Leg of Mutton reservoir). We passed  the Harrods Furniture Depository, now a residential complex, before reaching the boathouses at Putney. There was some discussion between a few of us as to which geese we were observing, Canada, Egyptian? The two groups caught up again and we stopped a moment opposite St. Mary’s Church where the Putney Debates on the English constitution were held in 1647, presided over by Oliver Cromwell. A few participants resisted the temptation of lunch at Wetherspoon’s and we all crossed the bridge and made our way, rigorously social distancing, through Bishop’s Park to Fulham Palace Gardens. There we were joined by another member who lives locally and was passing by. Oh dear! Now we were 6+6+1!  We quickly split into small groups and consumed our picnics while Susan bought a pizza from the pop up van and others bought drinks from the cafe. After taking advantage of the facilities the groups set off  a few minutes apart. The first group were overtaken immediately as they had stopped for ice-cream at the park cafe’ just outside the palace gardens. After passing Fulham football stadium we proceeded along the north bank towards Hammersmith Bridge, where the groups again convened, always strictly socially distanced. We  proceeded to The Rutland by the riverside for a quick drink as some members were leaving, two to get the tube for convenience and five to visit the Plough and Harrow, another of the much loved Wetherspoons, for ‘one for the road’. Five Polys continued through Dukes Meadows and over Barnes Bridge to take the train home. We felt very satisfied when our apps told us we had done nine not the estimated eight miles. A most enjoyable day, excellent company and none of the forecasted rain and storms.