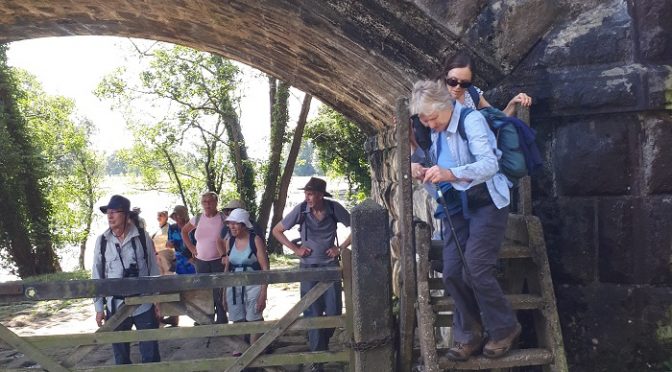 Friday 23rd August. 37 Polyramblers descended on Lancaster University for a long weekend of walking and sightseeing. The university complex is extensive so the first test on arrival was finding reception and accommodation, luckily Hilary’s sister Janet was on hand to assist as buses arrived. Janet and Hilary led an orientation walk around the older part of the city centre including Lancaster Castle and the Judges Lodgings and a number of historical pubs before we descended down to St Georges Quay’s  walking along the Lancaster end of the river Lune to the Wagon and Horses where we had an excellent meal. It was at this point that Danny pointed out that one of our group had not yet appeared, we later found out that his train had broken down outside Euston!

Saturday 24th August Hikers Walk. The Polyramblers enjoyed a hearty breakfast before the hikers left promptly to catch a bus to Lancaster and then to catch a further bus to begin our walk at Hornby a small traditional market town close to the river Lune where they were to begin their walk. The pie shop in Hornby proved very popular for hikers to buy their picnic lunch. The start of the walk proved to be problematic as recent heavy rains had resulted in a lot of mud and the River Lune Ramble path proved to be poorly maintained. We joined the Lune Ramble at Loyn Bridge which dates from 1684 and is within the Forest of Bowland an area of outstanding Natural Beauty. After two miles of brambles, mud and meadow we reached the village of Arkholme, recorded as Erghum in the Doomsday Book and an important local link in Norman times with a Motte and Bailey. We stopped to admire St Johns Chapel, which was unfortunately closed owing to an unsafe roof, before moving onto our picnic stop beside the river near the village of Newton. We continued following the river clambering over ladder stiles and through water meadows until we finally reached Devils Bridge marking the end of the Lune Valley Ramble, on the outskirts of the ancient market town of Kirkby Lonsdale. This proved to be a very popular destination for tourists who were enjoying the hot weather by paddling in the river. We had time for a quick drink where we met up with the strollers before catching the bus back to Lancaster. A few of us enjoyed a meal at the Mariners pub a very popular watering hole on St Georges quay, before heading back to our university accommodation. Strollers Walk.The strollers left rather later than the hikers and took the bus to Kirby Lonsdale where they started their five mile circular walk following the River Lune Ramble route, turning west towards the village of Wittington, where a few opted to take a bus back, returning to Kirby Lonsdale along a bridleway which had apparently now turned into an overflowing river. At the conclusion to the walk the strollers enjoyed a belated lunch, ice cream and beers before joining the hikers to catch the bus back to Lancaster.

Sunday 25th AugustCross Bay Walk from Arnside to Kent’s Bank.16 Polyramblers travelled by rail replacement coach (owing to insufficient Northern Rail staff over the Bank Holiday) to meet at the Clock Tower in Arnside to begin our walk across Morecambe Bay led by the Queens Guide Michael Wilson. The walk was organised by the Galloways Society for the Blind and it was estimated that 400 hundred completed the walk to support this very worth cause including some with sight impairment. Geoffrey came with us to Arnside to see us off and take lots of pictures. We were issued with bright yellow tee shirts so that we could be easily identified as a participant. It was a perfect day for the walk with lots of sunshine. The mud of Morecambe Bay made for some difficult walking and before long most of us had decided to go bare foot. We stopped 45 minutes into the walk for a quick refreshment at White Creek before reaching the best bit, wading across Kent’s Channel where we ended up with water above our knees. The current was surprisingly strong, and I linked arms with my fellow Polyramblers in order to keep our balance. A few dogs were reluctant to go further. We were accompanied by a tractor with Cedric Robinson on board who had recently retired as the Queens Guide. We finally reached Kent’s Bank and recovered from the mud and sand flies by refreshments at Abbot Hall Hotel before getting our train back to Lancaster.
Strollers walk The strollers were also affected by the shortage of train drivers. They took a train to Carnforth where they were able to visit this beautiful station with its iconic heritage centre and restored historical buildings. There was no Brief Encounter, but they were able to enjoy a snack and soak up the atmosphere in the Refreshment Room. The strollers continued the train ride to Arnside where they started the walk up to the Arnside Knott rising to 521 ft above sea level. From the top were panoramic views across the Lake District mountain ranges, Kent Estuary and Morecambe Bay. It was very hot, so the walk was cut short, unfortunately Geoffrey who was waiting for the group at Arnside was overlooked, however he enjoyed an extended lunch with Terry in the Fighting Cocks pub whilst awaiting their return.  The strollers climbed down to New Barns and walked along the coastal path to Arnside where they headed off to a pub and further refreshments.

Monday 26th August Hikers walk. This was an early start for the 21 hikers because of added complications of a cycling and Triathlon event at the university. We took a pacer train to Wennington, these trains were originally commissioned to be a temporary solution to the shortage of trains and had been built from the body of a bus. We bumped along through beautiful countryside before rather belatedly we reached our destination in the village of Wennington. The walk followed a rail to Trail Guide along the Bentham line from Wennington to Carnforth. Geoffrey had shortened the first part of the walk to make it 9 mls although this distance was disputed, and most hikers thought it was nearer 10-11 mls! We were directed by a farmer to the route across his fields this included ducking under an electric fence with hasty reminders to ensure that walk poles avoided contact with the fence. We passed the aptly named Windy Barn before stopping for lunch by the Loyn Bridge, our earlier attempts to stop by a motte and bailey had been thwarted by a herd of nosy bullocks. We hiked through fields and up steep hills on country lanes with amazing views of the surrounding countryside before tackling a field of chicken’s, eggs, thistles and nettles. After a  further hill walk and climbs over interesting stiles we eventually arrived at the village of Kellet Green where we stopped for a very quick drink before heading off to the Lancaster Canal and a walk under the M6 motorway to finally arrive at Carnforth to catch our train back to Lancaster. The last part of the walk was completed in record time enabling us to take the earlier train in order to get ready for our evening meal. This really was an achievement and all credit to those who are not regular walkers with us. Strollers walk.The 7-mile strollers walk did not involve any transport. They were able to leave the university at a more leisurely time walking along a country lane following the river Lune along a disused railway line. They stopped for refreshments at the Stork inn at Condor Green and returned via the towpath of the Lancaster Canal.
For our last evening of our stay at Lancaster University we all had dinner at Food works at the Lancaster House Hotel, a part of the university complex. The Hotel staff were very efficient and ensured that copies of the menu were on the table and food was served promptly. The meal was enjoyed by all. Some of us then joined Danny in the Graduates Bar for a night cap.

Tuesday 27th August. On the last day in Lancaster, the weather, although cloudier, remained warm and dry. Those who had not left early took a bus to Morecambe and went on a self-guided walk. We walked the length of the pier following the Art installation trail of Terns. We stopped at the lifeboat station where we had an informative talk with the person in charge who explained the importance of the use of Hovercrafts in the area. We reached the statue of Eric Morecambe who as well as being a much-loved comedian, was a keen Ornithologist. We couldn’t resist posing with Eric Morecambe. We passed the grade 2 listed clock tower and reached the Lakeland Panorama designed by Russell Coleman depicting the dramatic mountain landscape of the Lake District. We stopped for an ice cream before heading back to the Midland Hotel built in 1933 with a sweeping staircase and some of the original murals and sculptures. We caught the bus back to the university with plenty of time to retrieve our suitcases and head back to Lancaster station and the end of a packed weekend in an area which is full of history and great walks.
Many thanks to Geoffrey and Danny who would not have made this weekend work without all their hard work and input.