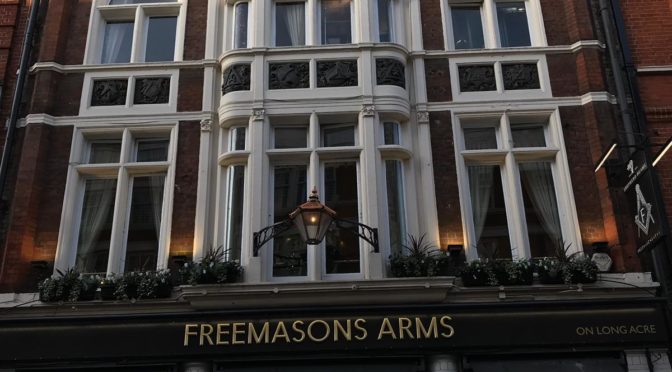 Twenty two Poly Ramblers gathered at Leicester Square for a walk to whet our appetites for Christmas lunch. It was not raining for a change though it was quite chilly.  Danny had planned a walk ‘ in the footsteps of’ Karl Marx, an interesting choice in the light of the  week’s events.   Marx spent the second half of his life in London and died there in 1883.

The route took us through the streets of Soho and then across Oxford Street into Fitzrovia. There was little evidence of  Marx  save for a  blue plaque in Dean Street,  but Danny pointed out various buildings where he had lived for a few years at a time in the mid 1800s. We learnt that he had lived in poverty and squalor, many of his children died of TB before reaching adulthood and he was a frequent customer at the many hostelries in the area. Not quite the image I had of him.  Keeping the political theme, Danny also pointed out some buidings in Fitzrovia used for meetings by ANC members during the struggle against the apartheid regime in South Africa in the 1980s.  We passed the Duke of York pub in Rathbone Street.  I can’t recall if this has assocations with Marx too  as we were too busy admiring its signage …..!

After an hour or so we were starting to feel hungry and cold and I for one was pleased to reach Covent Garden and the Freemasons Arms. Forty eight members had booked for lunch though unfortunately two people were unable to attend on the day. We convened in our usual upstairs function room, festively decorated with an extra  table to sort out our Christmas cards. As ever the service was good and the food came out hot. Danny did a great job of helping the waitresses to direct the food to the right people and reminding those who had misremembered what they had ordered. With two people missing there were some spare meals available and Andrew, at his first Poly Christmas lunch, surpassed himself and went down in Club history by consuming three main courses. Stuart also managed two desserts. This year we had mince pies and coffee thrown in too so I think everyone must have been  full by the end of the meal. Hilary, our Chair, who had just flown in from Melbourne that morning (as you do), managed to stay awake for long enough to deliver her speech, looking back over the previous year and forward to the next.  It was lovely to see everyone especially members who can’t get out on walks these days for health or other reasons. Thanks to Danny for organising a very enjoyable walk and meal and Merry Christmas to all.

Photos by Gillian and Dominique