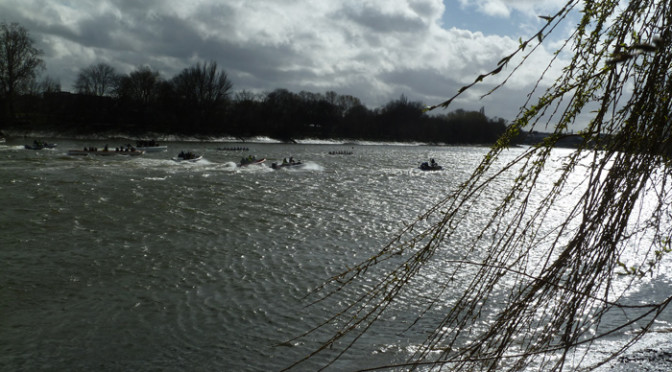 The second walk of the Easter weekend saw nineteen members and Maria’s guide dog Bella set off from Hammersmith along the north bank of the Thames towards Putney. Previously a location for light industry, now upmarket flats predominate. On route, we admired an earth sculpture in the shape of a turtle and paid our respects to a statue of Johnny Haynes outside Fulham football ground. After crossing Putney Bridge to the south bank, the first of two spectacular hail showers courtesy of storm Katie sent us running for cover to a nearby pub. Unfortunately it was yet to open but we were able to find cover. When the skies had cleared, we headed off past the Oxford and Cambridge boat houses, decorated in their respective colours. However we had lost one of our number as Sandra had decided that she wasn’t properly kitted out for the unpredictable weather. Leaving the towpath, we followed Beverley Brook to Putney Common through which the leader managed to deviate from the planned route because of a poor sense of direction! Fortunately we didn’t go too far wrong and we were soon crossing Barnes Common to the quaint village duck-pond and the attractive High Street beyond. The party then split into two groups for lunch with some sampling the limited menu at the Coach & Horses pub and a hungrier crowd having the full works in the Pizza Express! Whilst we were eating, the second spectacular hailstorm of the day provided interesting entertainment. Four more of our number then decided to leave us before the remainder of the party crossed Barnes Railway Bridge and headed back through Dukes Meadows towards Hammersmith Mall where we stopped to watch the Women’s Boat Race pass through very rough waters. A sojourn in a local pub was suggested whilst we waited for the Men’s race as our number diminished further. However the cosy atmosphere and convenient television deterred all but two of the remaining group from returning to the tideway! All in all an interesting day.