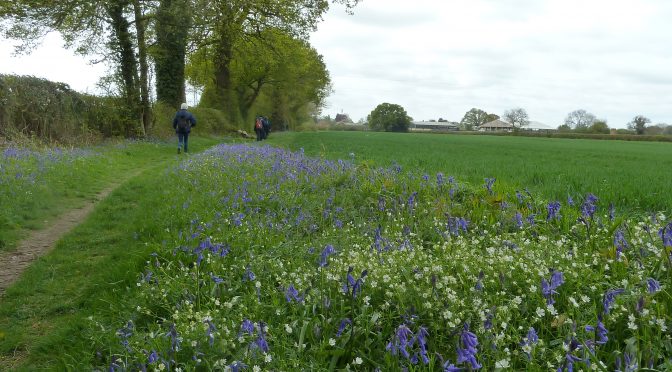 There were only five of us on the train at Marylebone so we were somewhat relieved to see another five waiting at Great Missenden. It was misty but dry and mild  as we set off through pleasant rolling country with  open views. We crossed the railway to reach the old village of Little Missenden, stopping to admire the 13th century wall painting in the church of St John the Baptist. Continuing, we were soon in Penn Wood part of one of the Chilterns ancient woodlands. Chairmaking, centred on High Wycombe  flourished  from the mid 18th century  and Penn Wood was an important source of timber. Although chairs were assembled in factories,  the legs and spindles were usually  made in situ in the forest,  on hand powered lathes. We arrived at Penn Street,and had  an enjoyable lunch in the friendly Squirrel pub. Fortified, we carried on via Winchmore Hill and Coleshill,  after which we passed a water tower, featured on Grand Designs. We were soon in Amersham with its attractive wide main street, harking back to the days when it was an important market town. A small contingent took tea in the town but most of us undertook the final 20 minute climb of the day, up to the station. On the left were some well tended allotments and we spotted a large bird of prey keeping guard.

A nice walk – many thanks to Ken for leading us.