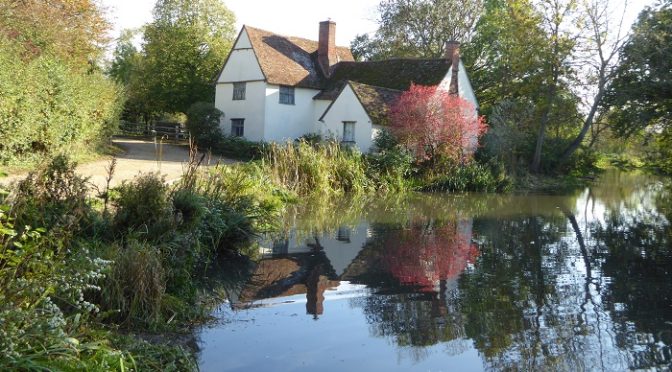 There were 15 on this  walk, led by Sandra, in the heart of Constable country on a beautiful, sunny autumn day. We followed the Essex Way through the countryside to the pretty village of Dedham where we had lunch. We had time to visit the church, which has a painting by Constable, and the art and craft centre. We continued along the river Stour and strayed into Suffolk up to East Bergholt, the birth place of Constable, where we stopped for a look at St Mary’s church and bell cage. Then it was off to Flatford Mill, previously owned by Constable’s father, and its National Trust tea shop where we had tea and cakes. Most of us chose pumpkin and walnut scones which were delicious. Another two miles took us back to Manningtree station after a lovely day in the Dedham Vale Area of Outstanding Natural Beauty.

Manningtree Station has a flourishing café and bar offering real ale. Some of us took  the opportunity of sampling this, enjoying the late afternoon sun. Coming off the London train,  I noted a fair number of souls, wearing their Bollocks to Brexit badges . A number of club members attended the march too so perhaps all is not yet lost. Thanks to Sigrid of Morley Ramblers, whose walk Sandra borrowed and who came with us to make sure we didn’t stray. Thanks to Dominique for the majority of the  text and to Pam for the lovely main photograph.