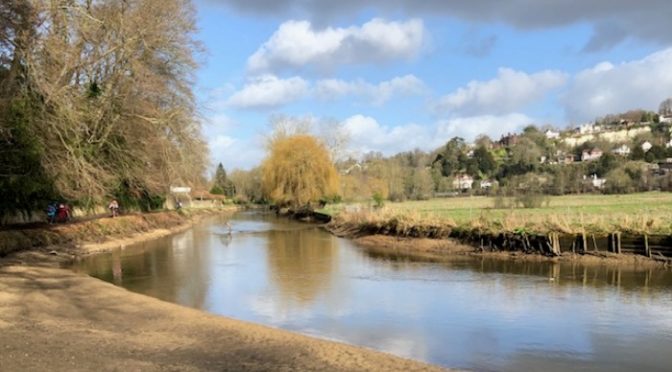 After a week of damp and dull weather, some improvement had been forecast and 16 of us stepped off the train into watery sunshine. A number of us hadn’t been to Guildford and were surprised to see the remains of the castle and it’s well manicured grounds, virtually in the town centre. (Yes, it is town, despite having a cathedral. City status is apparently granted by the monarch, and although applications have been made in the past,  they have been unsuccessful.)  We headed steadily uphill past increasing larger and desirable houses emerging onto Pewsey Downs. By this time the sun had come out properly and we enjoyed extensive views towards the South Downs.Descending we followed the North Downs Way to the west and the River Wey. This was in a somewhat sorry state, the water level being lower than normal by a metre, apparently due to a weir being breached at Guildford. We followed the river into the town, passing the occasional duck but there was not enough water for boating, the normally busy Guildford Rowing Club being closed. At the town end, a few of us went to see the damaged weir and empty lock. It’s clearly going to take a while to sort out.

We lunched at various pubs and continued along the Wey, turning off and climbing up via the University to the Cathedral, sited on Stag Hill. This relatively modern building was started in the 1930’s but not consecrated till the ’60s. A final brief climb took us up to Henley Fort and another view towards the south. Following the ridge down into the town we passed Guildford cemetery, the last resting place of Lewis Carol, author of Alice in Wonderland.

Thanks to Ida for the photos.